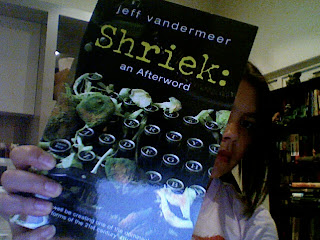 I read this sitting beneath the patio at my grandparent’s house in Malaysia. It was hot and muggy, with the moist air thick and sticky and the sky constantly grey with haze. Malaysia is a land gone mad with green (at least to my Australia-accustomed eyes). All buildings, roads, fences, walls, it seems everything is being over run with plants and lichen and moss and mould. What with family being what it is, it isn’t a country I’m comfortable in. No better place to read this book.

It is the story of the city of Ambergris, told through the lives of the siblings Janice and Duncan Shriek, further filtered through overlapping accounts and narrators editing each other’s voices. The primary account is laid down by Janice, who frequently uses passages of Duncan’s journal. This narration as a whole is scattered and interrupted by Duncan’s later notes, correcting her, agreeing with her, chiding her, filling in some of the voids in her knowledge, just as she is scorning, admonishing, and sighing at his private writings. They expose each other as highly unreliable narrators, leaving the reader wandering somewhere between the two of them. VanderMeer pulls this off with minimal wobble. Carrying multiple voices simultaneously isn’t so hard, no more than having your own conscious pass judgement in the back of your mind.

I couldn’t say which story takes precedence; their personal lives, or that of the city shaking history. They’re so entwined, there may only be one story. The city forces the paths they take, their private decisions have ramifications on the whole city. Duncan in particular, with his subterranean ramblings and increasing knowledge of the entirely incomprehensible greycaps warns of a terrible doom and seems to bait said doom all on his own. His mushroomification hints at things to come. There are probably worse fates in life, than to be turned into a walking mushroom garden, but it’s rather unsettling, to say the least.

This book is too confused with where and when I read it. I can’t draw together any coherent thoughts without dragging in the patio, the concrete garden, a foreign country and a family of strangers. I can say that I didn’t entirely like the demystification of the greycaps. I preferred them as entirely alien, it made them far more creepy. Giving them a purpose to reach for and fail and made them (mildly) more sympathetic.

In the end, it doesn't really matter how insane the setting, the world, the character or creature is; everyone's just trying to get where they're going.

Verdict: Excellent, but you've probably figured out by now I'm partial to a VanderBook.
Posted by Tessa at 7:01 am