When our powers combine...! 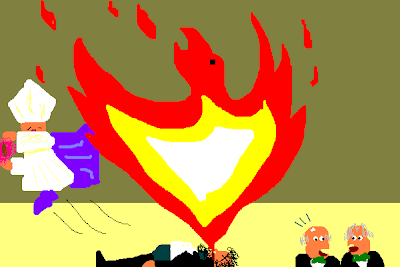 Here we see SUPERPOPE, who had thought to give PAVAROTTI his Last Rites, only to be surprised as the PHOENIX, which had been chilling in Pavarotti's immense paunch, launches itself into freedom and glory. Superpope takes this badly, and is about to go all hadouken on the phoenix's ass. He has conjured that most holy power, the YEARD OF GOODKIND. In the corner Statler and Waldorf are on COMMENTARY, and they are not impressed. Statler has a GLISTENING SCALP, due to incidents which he will not be relating at this point in time.
Posted by Tessa at 4:54 pm