Matt Staggs, over at Enter The Octopus, gathered together a lovely collection of pictures of coconut crabs- 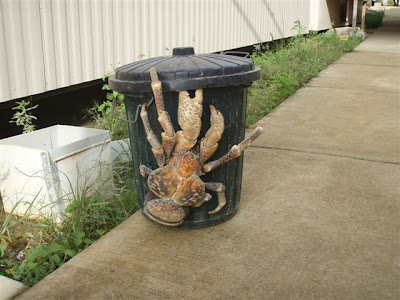 -which you can view here.

Coconut crabs fall into a sort of "uncanny valley" when it comes to oversized animals. There is a point at which making an animal bigger than normal does not make it scarier than normal, and that is about the size of a small to medium dog. Seriously, if you can drop kick it, it isn't scary. If you can stop it with a golf club, it is not scary.

Still, I wouldn't want to drop kick a coconut crab. I imagine it'd hurt. Incidently, if you happen to be pinched by a coconut crab, the best way to make them let go is tickle their belly. With a feather. Plying them with red wine doesn't hurt either.

Now, I'm sure you've all heard about the defrosting of the Colossal Squid, that which is the MOST BADASS creature of the world. Seriously? BAD. ASS. Bigger than the Giant Squid, and a damn sight grumpier too. Did you know it has HOOKS? 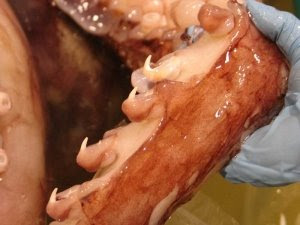 I'd also like to draw your attention to this sentence, contained in the above linked article:

The Colossal Squid can cloak itself similar to a Klingon Bird of Prey.

Which, actually, a lot of sea beasties can do, but such a trait can only ever add to the BADASSNESS of such a magnificent beastie.


(gakked from artbroken, Ironman and Batman do not play together well.)


(gakked from some guy at work: hip-hop about the superiority and delight known as tea. WORD UP.)

And I know you've all seen this article about the sexually frustrated seal;

The seal then alternated between resting on the penguin, and thrusting its pelvis, trying to insert itself, unsuccessfully.
After 45 minutes the seal gave up, swam into the water and then completely ignored the bird it had just assaulted, the scientists report.

But I believe it needs repeating.

Labels: coconut crab, colossal squid, nature is WINNAR, sea beasties, sexual harassment seal, this post is brought to you by the letters O M and G