Before The Other War 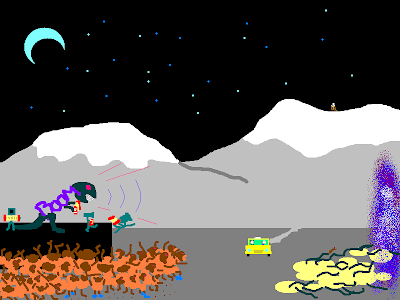 Here we have a depiction of that eternal conflict between ASSMONKEYS and CTHULHU'S GONADS. On the left, BOOMzilla and the CCTV Allstars jam out death metal on their ACCORDIANS, in the first opening salvo of the battle. The assmonkeys mosh and work themselves into a beserker rage. Being as it is very cold, some of the assmonkeys have elected to wear BOOTS. Those who haven't have had some of their TOES fall off, but in the heat of the moment have failed to notice.

To the left is an interdimensional portal through which the offspring of Cthulhu's gonads are pouring. Being as they do not have feet, they are not wearing boots. Nevertheless, the cold affects them and they have shrunken somewhat.

In the centre is the GYPSY CAB DRIVERwho, being a cab driver, has no idea where she is going and has thus found herself between these two titanic armies. Her friend has just noticed WILLIAM SHATNER'S TOUPEE being wielded by one of the gonads, and realises he has finally discovered the CURE to his poison. He's about to spill his PURPLE COFFEE on his lap in his excitement. They're both going to die horribly.

A LONE FIGURE ON A TRICERATOPS is present in the distance. They are eating chips. With gravy.