what in my mouth?

Today, I did not go to the zoo. I did not walk around the botanical gardens. I did not tag my archives. Actually, today was largely a string of failures to achieve, but nevertheless, was not wasted.

I had a food adventure, I had dragon fruit. 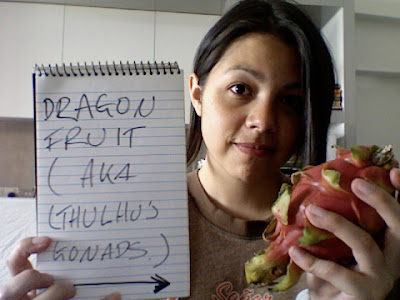 I've been eyeballing these at the supermarket for years. How could something that looked as freaky as that not be the best fruit devised by nature? Put off trying one for years because, well, just look at the damn thing. It IS freaky. Cthulhu's gonads, dragon fruit, ugly ball of scaly pink leather. How do you get into something like that? I know you could just cut it in half, but that doesn't seem...proper.

Thankful, the art of getting into a dragon fruit was revealed to me while watching game shows in Japan. Two men with a little cart and toy pony were walking in opposite directions around an island. Their goal appeared to be to gather food to feed themselves. They went to sugar mills, peanut farms, and spent many hours in the ocean with professional fishermen looking for shellfish and lobsters. One of them came across a man with an orchird full of all sorts of fruit, dragon fruit among them. From this, I learned that you peel the scales back, like a many-flippered banana.

I should mention I have no idea how to tell if a dragon fruit is ripe. I just, you know, dove in. The skin is pretty thick and tough, and I had to use my fingernails to start the process. Just beneath the outer layer the skin is a violent shocking pink, and within it is...this....thing. 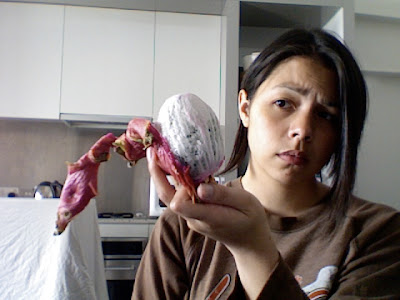 Which...is that a dragon EGG? Is that Cthulhu's actual TESTICLE? I don't know, but it weirded me out more than the skin did. It was full of little black seeds, like kiwi fruit, and they were looking at me, I swear. I was sitting there, looking at this testicleeggfruit that I was supposedly going to put in my mouth, and thinking of the egg sacks spiders make.

I put it in my mouth anyway.

...it tastes like nothing. It isn't sweet, sour, bitter, it isn't anything. It takes like a giant mouthful of wet, slick, BLAND.

Come on. Does nature know nothing about the power of packaging? What's the point of making a bright pink obnoxious flipper ball if it isn't going to taste like a cocktail party? Colour me disappointed. Cthulhu, your gonads are lame.
Posted by Tessa at 12:25 pm