This Is The Tale Of Harry Houdini, Who Died And Came Back As A River Fish In Malaysia

Some time in early November last year, when I spent a brief week on the other side of the Equator, my father called me out into the paved laundry area of the house. There was a large polystyrene tube on the ground, with my uncle standing proudly over it.

Look at this, he said.

The fish was huge. Freaking huge. As long as my arm, and thicker too. Time and the river had coloured it a drab invisible brown. It barely fit in the tub, and sat idle on the bottom, clearly not much impressed with the situation. 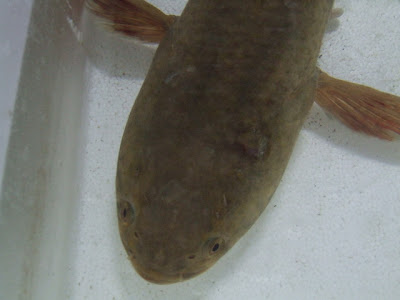 Caught it in the river, my uncle said.

We used to catch these when we were kids, Dad said, they had teeth like this- and he imitated Tim the Sorcerer of Monty Python notoriety. I crouched down, but couldn’t see any sign of these giant fangs.

The fish spasmed once, thumping the tub. How did you get it home?

My uncle drives a BMW. With leather upholstery and all the trimmings. I didn’t say anything.

Going to eat it?

Dad pulled a face. He wasn’t keen on eating what was pulled from the river.

Again the fish rocked the tub. They put a folded deck chair over it, to keep it from jumping out. I peered at it through the cracks, and it ignored me.

The next morning I wandered out to have another gander. The tub was as we’d left it, with the deck chair as a lid. I leaned down for a peek, and couldn’t make the fish out. Odd. On lifting the chair, I discovered that this was because there was no fish.

There, he gestured at the tub.

He came over and inspected the tub for himself. Significant lack of fish. He must have given it away, he said with disgust, to one of his mates. Yeah, he must have. Dad walked off shaking his head, muttering. Why? I don’t know, it wasn’t as though he wanted to eat the fish anyway. I went back inside, disappointed.

Dad, being Dad, didn’t let it go. As more and more relatives spontaneously arrived for dinner, I heard him asking if my uncle had given them the fish. He asked my cousins and his other siblings, until at last my uncle came home.

Did you give the fish away? Dad asked, almost before he was out of the car.

I could practically hear the questions marks forming in their minds. Where, then, was the giant fucking fish? The deckchair didn’t have any gaps in it large enough for even the most acrobatic of goldfish to leap through, and it hadn’t been moved. It was sitting flush on the tub when I discovered the disappearance in the morning. Suddenly, everyone was involved. Looking in buckets and checking in random pots, as if the fish was hiding in the kitchen, in the tool box, in the pantry. Where was the fish?

Then a cry; my aunt had found it. Out the front. In the drain.

The tiled floor of the laundry slopes down into a gutter that runs out of the house into the drain, and presumably that is the path the fish took.

I mean, ewwwwww. It’s the sort of drain that is deep and soupy. Opaque. Busy.

They scooped it up in a bucket, flopped it on the tiled floor, and pointed a hose at it. It’s possible I was imagining it, but I don’t think I’ve ever seen a fish so relieved to be out of water. The grit and muck and filth ran off it and across the floor in thick streams. The fish just lay there. It didn’t flail and gulp at the air. It let my uncle wash it till it was visibly clean, and went back in the tub without complaint. It didn’t glare so much this time. I think it was pretty traumatised.

There, my uncle dried his hands. Fine. We’ll just change the water every day, clean it out. Good eating.

You know, Dad said, our shit goes in that drain.

A couple of weeks later, back on my side of the Equator, I asked Dad what the fate of the fish was. My uncle had changed the water as he’d said, but no one was game to eat a fish that had been in the drain, and eventually, they gave it back to the river.

So, I ask you, how did the fish get out?

My memory was prompted by this contest (tell a story, potentially win many stories). I’d been meaning to post this for a while, but it was overlooked in the whirlwind of moving house, Christmas, and all that jazz. I feel you should know I come from a family of (among other things) fish wrestlers. Yeah, they rock like that.
Posted by Tessa at 9:45 pm