I could wax lyrical on the many heartbreaks your continued silence has inflicted upon me, but I believe in conservation of words. A picture being 1000 words, here is 1000 words of 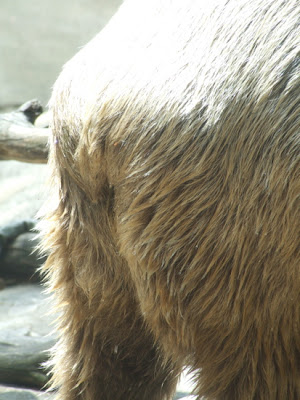 Having given up on mystery CIA worker, my attention has turned to…

…the guy with the office across the alley from my kitchen window.

Look, I have no idea what his job is. All he ever does is sit at his desk. I can see his screen, and the majority of his time appears to be spent checking his email and surfing the net. He doesn’t have many visitors. The shelves and walls of the office are bare. There doesn’t appear to be much in the way of documents on his desk. He’s there at 8 in the morning, and usually there till just before 8 at night.

His back is to me, and I’m not sure he’s noticed my existence yet. I watch him because he’s the only other thing out my window apart from the pigeons, and I’m one of those people who just gravitates towards windows. I wait for him to do something different, like answer the phone, or get a cup of coffee- hey. I’ve never seen him with a mug, now that I think of it.

Yesterday, he was putting together slides in PowerPoint. Oh yeah, exciting day! Flipping through print outs and taking notes. I could only making out clipart of Australia in amid the dot points. He even went as far as to put on a headset and record himself making his presentation, so he could play it back and listen to it. This is the most action I’ve ever seen in that office.

He left at twenty to eight.

I took a roll of toilet paper from the bathroom, and tore up four lengths of three squares each, and with my big black texta, wrote. 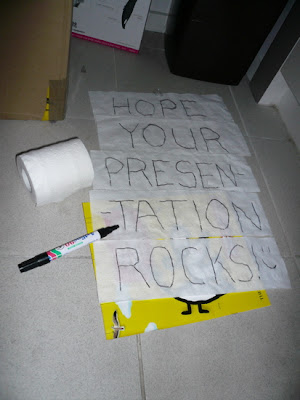 I stuck these pieces of toilet paper to my window, and dropped the blind.

I don’t know why I do these things. They’re creepy and stalkery and can be easily taken as invasive (not that I can help what the view from my kitchen is). Maybe I like surprising people. I’m probably just projecting my own loneliness on the world around me, and am acting on the assumption that other people need their existence acknowledged too. He’ll probably be weirded out, and put the blinds down permanently, leaving me with just the pigeons.