One of the perils of blogging about ‘stuff wot I like’ is that, occasionally, the person who made the ‘stuff wot I like’ sees said blog and responds to it. It’s not necessarily a bad thing, but it is a mildly unsettling thing. There’s a mental block involved; I, consumer, over here. Them, creator, way way way over there. And very rarely shall they meet. Except the intrawebz makes that distance non-existent, and google is the Great Eye That Sees All.

In this instance, someone over at Archangel Studios happened across this post, which resulted in Christian Gossett saying thanks, sending me a bunch of pages from the upcoming #3 of Sword of Lies (insert OMGWAAAH!!!!!! here), and giving me permission to post them here, should I wish to.

I ummed and aahed over this. I’m not a PR machine, and this isn’t a PR blog. I don’t generally like to buy into hype, I prefer to go hyper after I’ve devoured a product and have decided that it is indeed worth going hyper about. That lack of distance between consumer and creator, and the way in which intrawebz makes tapping a stranger on the shoulder an easy and effortless thing, I’m not sure these are comfortable things. For better or worse, I put the creators of ‘stuff wot I like’ on pedestals. Being tapped on the shoulder out of the blue by one is not so different from Cthulhu tapping me on the shoulder.

Except I’m less likely to go all breathless fangirl and more likely to run screaming from Cthulhu.

Not that I’m comparing any of you fine creator types with giant angry butt-ugly walking squids.

Not that I’m dissing Cthulhu either, you know, never a finer giant angry butt-ugly walking squid.

That said, this is a blog of ‘stuff wot I like’, and hot damn, these pictures are mighty fine. 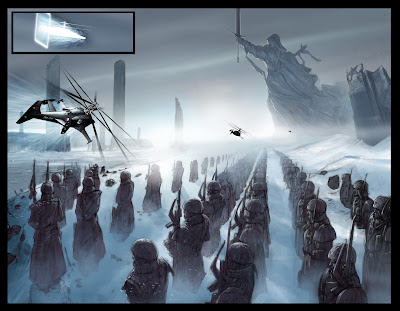 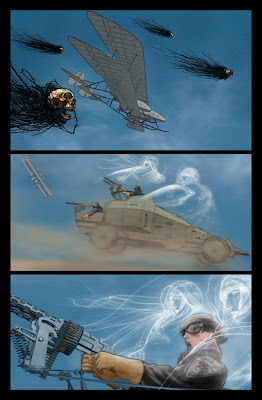 Is that not just totally hot fucking sex right there? I’m guessing that last one is a flashback, which hopefully means more of Imbohl’s story unfolding. Fingers crossed this issue has something less than a one year waiting period, ‘cause my impatience level just went through the roof. Augh. I had plans for tonight, you know, I was going to put my insomnia to good use. Yet, premonition has struck me! I see the future! Tonight will be spent reading all my Red Star books! Shitfuck. OH WHAT A TORTUROUS ARDUOUS LIFE.
Posted by Tessa at 9:01 am