"Lions, and tigers dragons, and bears lettuce, oh my!"

When hunting for lions, there is absolutely no point in locating one, and attempting to get closer, as that is the same tactic being used by the hundred or so people around you. Instead, it is advisable for the hunter to find a restaurant that still has a string of fire crackers and lettuce on offer, find a comfy wall to lean on, and wait for the lion to come to you. 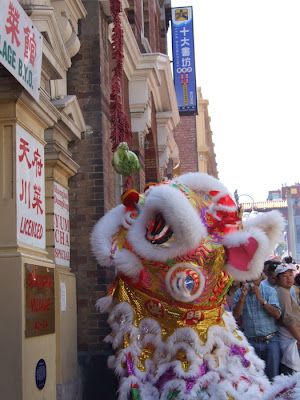 Some call this lazy, I call this efficient convervation of energy. Also, it works. Not to mention you get a prime viewing position, which is important when your short and the world is full of tall people.

Lions are quite hard to photograph, what with all the leaping about, yet ever so pretty. 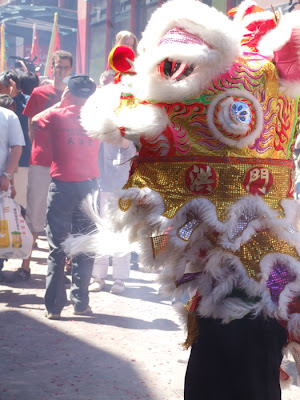 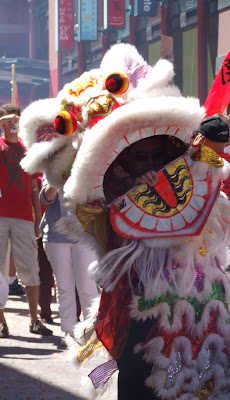 YES. THAT IS NEO IN THE LION'S MOUTH. THE ONE ISN'T SO TOUGH AGAINST DANCING LIONS. BOOYAH. 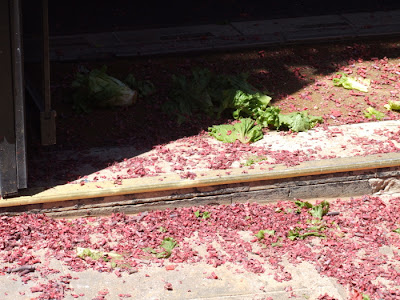 Lions are messy eaters. For srs. Take note, other hunters, that if you're going to stand right by the firecrackers when they go off, bring ear plugs.

Lettuce and oranges are standard fare when it comes to feeding lions. Beer cans, though? They're new to me. It wasn't an isolated event either, I saw multiple lions going through various cans of beer. They went through the same motions of eating; tossing the item in the air, making a great show of devouring it, and then hurling it out over the crowd.

When a little girl on her dad's shoulders nearly caught a can in the face, I kinda cackled a bit.

I was blocked by lions when Dai Loong finally came out, magnificent beast that he is. It took a minute or so for the length of his body to emerge from the alley, and he turned up Little Bourke Street and onto Exhibition, and disappeared. I figured hunting dragons isn't all that different to hunting lions, and parked myself at said alley (at the end of which is the Chinese Australian Museum, Dai Loong's home), to await his return.

They had to reverse park him back into the museum. Yes. The dragon did a three point turn. 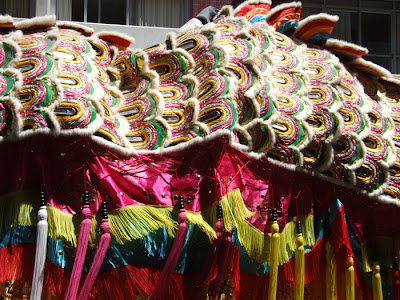 I had a great view. This guy is so big, his body is made of, I don't know...train cabooses.

They parked him briefly, to give the handlers a rest and give the crowd a photo opportunity. Lions appeared all over the place, and made a great show of standing tall. Seeing the actual dancers close up revealed how utterly wrecked they were, from all the leaping, cavorting, and lifting people up to stand on their shoulders. Couldn't move for bright colours. 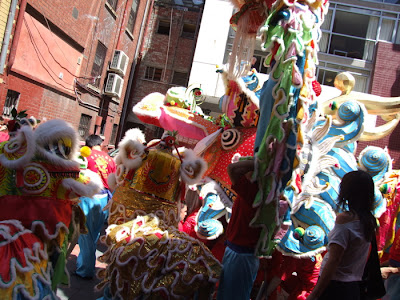 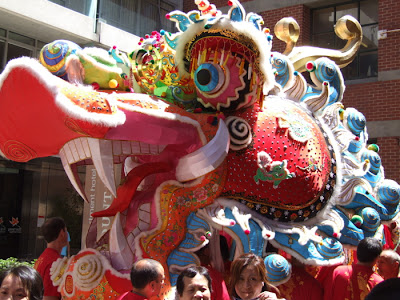 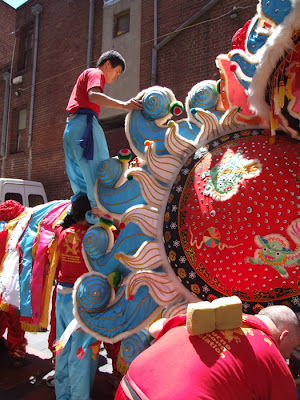 It took about twelve big burly men to get it off the ground. He slunk back into his museum home, and I, having had a successful day's hunting, retired. Attempted to retire. Crowds, man, they kinda get in the way. The whole city smelt of greasy chinese dumplings, incense and firecrackers. I crave yum cha like you wouldn't believe.