If you intend to travel to western Tibet and particularly Mount Kailash and Lake Manasarova any time in the next couple of months, you should know that the road (there's only one) is fucked.

It's undergoing some serious roadworks. They're so serious it doesn't look like roadworks at all. It looks like they're building the damn thing for the first time. There is no sealed road from Saga onwards, and if you hit a stretch that has had the rocks cleared you'll start cheering. Some stretches have been leveled, but they're rare treats. They appear to be putting in drains or something similar, which involves digging up the road every couple of kilometres and around which you must detour. You will be catapulted from your seat, you will hit your head, you will get very tired and grumpy, and you will not go far fast. If you have boobs, you will need to get some seriously hardcore sports bras.

Our itinerary was originally to drive from Sakya to Saga, and then Saga to Darchen where we would start our three day kora around Kailash. We got word from a group going before us that the 9 hour drive between Saga and Darchen was actually 16, with them starting the trek the next day. We had to do a lot more time in the 4WDs to stay on timetable (one plan that was thankfully jettisoned involved leaving at 3 in the morning) and not screw ourselves over.

I recommend an mp3 player with some sort of travel battery, and a light long-sleeved top. The air up on the plateau is icy, but the sun is incredibly enthusiastic, and when you're out of the wind it is hot. You won't often be able to put the windows down due to dust. After a particularly long period of time going through roadworks up a mountain pass, we pinged the temperature inside the 4WD at 36.7C degrees. Then we stopped, opened all the doors and the temperature dropped 20 degrees.

These are long days, by the end of which you will be in a bad mood. Suck it up. There is no other way to get out there, and it is worth it. 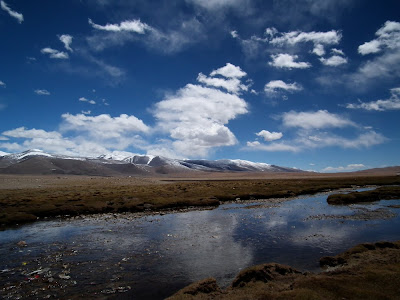