I didn't buy much in the way of souvenirs in Tibet. There is plenty available which would serve well - prayer flags, prayer wheels, rosaries, yak bells and so on - and the streets around the Jokhang and Barkhor Square in Lhasa and the Tashilumpo in Shigatse were lined with stalls. The opportunities were there (and saying, "Hello, hello, hello, hello,"). 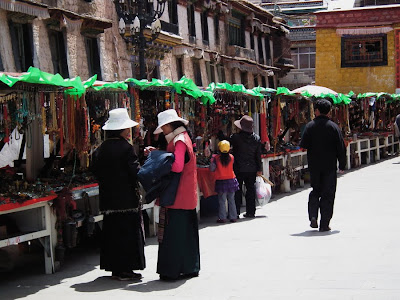 Most of what is on sale are cheap imitations imported from China and Nepal, as stated in the Lonely Planet and confirmed by both our tour leader and Tibetan guide. There is a stall selling religious items inside the Jokhang, the holiest of holies in Lhasa and Tibet, and there I found a gorgeous wooden rosary. Being quite expensive and found inside the Jokhang, I assumed it must be genuine Tibetan.

I did that thing I do when shopping, and walked off to do something totally different. When I returned, the display had been disturbed slightly, and the maker's certificate in the box below was now visible, with a massive MADE IN CHINA glaring at me.

You know me. I don't like being thwarted. It became a quest to find something that was Tibetan and made by Tibetans, which in Lhasa is trickier than you would think. The Lonely Planet guide came to my aid, however, and one afternoon I took myself off wandering through the back alleys behind the Johkang, around to the Muslim Quarter, up some more back alleys and through some courtyards - they have different ideas about space there - and found Dropenling; a shop that specifically sells goods made by Tibetans, the profits of which go back to those same artisans.

(And for those of you who recall some of my adventures in Japan; can you believe I did not get lost doing this? Not a single wrong turn, not a single instance of heading in exactly the opposite direction! I was gobsmacked too, considering the alleys I was walking through had no landmarks to speak of. 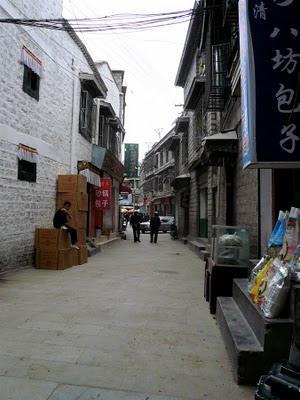 I shouldn't call them alleys. They're streets. They're organic Lhasa.)

And that is where I bought my awesome little snow lion.

As soon as I saw him I fell in love. The big manic eyes, batty happy ears, massive toothy slavering grin - how can anyone resist? When I proudly showed him off to my traveling companions, they didn't see the love. They said he was scary and ugly.

Wikipedia has the following to say on the subject of snow lions:

The Snow Lion resides in the East and represents unconditional cheerfulness, a mind free of doubt, clear and precise. It has a beauty and dignity resulting from a body and mind that are synchronized. The Snow Lion has a youthful, vibrant energy of goodness and a natural sense of delight. Sometimes the throne of a Buddha is depicted with eight Snow Lions on it, in this case, they represent the 8 main Bodhisattva-disciples of Buddha Shakyamuni, the historical Buddha. Associations: main quality is fearlessness, dominance over mountains, and the earth element.
--

The Snow Lion is an archetypal thoughtform confluence or personification of the primordial playfullness of 'joy' and 'bliss' (Sanskrit: ananda; Tibetan: dga' ), somewhat energetically comparable to the western unicorn, though without a horn. Though paradoxical, the Snow Lion does not fly but their feet never touch the ground; their existence is a playful 'continuum' (Tibetan: rgyud) of leaping from mountain peak to mountain peak.

Later, when I proudly showed him off to my mum and told her he was a snow lion, she said, "There's no such thing as a snow lion!"

If that is true, then the world is not as awesome as it should be. 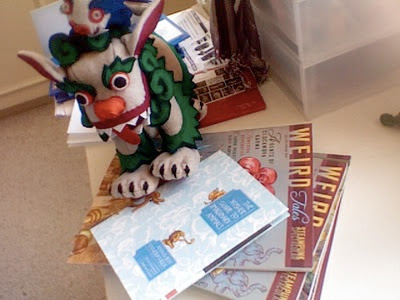 The postal service has brought unto me more objects of delight! Copies of Weird Tales #355: Steampunk Spectacular, huzzah! I haven't read it yet, but don't doubt it'll be as tasty as all the issues gone before.

There are four spare copies I'm giving away, and actually while I think of it, I also have a couple of copies of issue #354 lying around as well. For the second year running Weird Tales has been nominated for a Hugo Award, with voting closing on the 31st of July. Interested in sampling this mighty magazine? Leave a comment, first in first served.

The magazines weren't alone; in their company was a copy of Ann & Jeff VanderMeer's The Kosher Guide to Imaginary Animals, and my snow lion got his paws all over it.

On flip through it's a delightful little book with some delectable illustrations. I made a very careful check and double-check of the table of contents. Snow lions are not listed.

Ergo, they are not imaginary.

Ergo, they are real.

And the world is significantly awesomer for it.
Posted by Tessa at 4:44 am