"Only you could come back from Tibet with BOOKS."

I dispute the above statement. 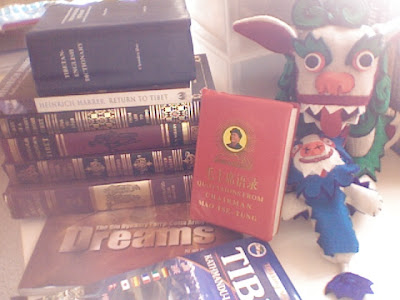 There are plenty of people within my pocket of society who would do exactly the same. Yeah, I'm looking at you. And you. And you especially.

Alas, none of these books were bought in Tibet. The only books I met in Tibet were scriptures sold in the Sera Monastery just outside of Lhasa, and while I was tempted, the Tibetan spoken language tends to flummox me, and the alphabet is far beyond my comprehension.

Besides, the last place to buy books about Tibet is in Tibet. Thank you, CCP.

From China, I present the Little Red Book (which is not a quality print job, I think it has been made from toilet paper), and The Qin Dynasty Terra-Cotta Army of DREAMS.

This second book is signed by Mr Yan. The Mr Yan. A skim around google will teach you that Emperor Qin's tomb was first discovered "by local farmers drilling a water well".

Mr Yan is that farmer.

He's not a farmer anymore. The discovery made him a millionaire, and now he spends every day sitting in the museum shop, smoking and signing books. That is all he does. He wins the prize for being the most dour, sour, grumpy and glowering old man I met on my journey. He needs to quit smoking too.

The rest came from Kathmandu, Nepal, a city that is apparently Mecca for all manner of books concerning Tibet. Baggage space limited what I came away with, but regardless, that's a pile of pure treasure.

Return to Tibet is Heinrich Harrer's account of his return to his second home after Chinese occupation. Seven Years In Tibet, his account of how he came to live in the holy city of Lhasa in the first place, is an exceptionally wonderful read.

The Tibetan-English Dictionary I snatched up as soon as I saw it. If perhaps I'd taken a moment to think about it, I would have left it and spent more time hunting for an English-Tibetan dictionary, heh.

ནང-མཆད nan-mchod 1. mystical religious service; also offerings made to deities in such a service, the most important offering being sanctified beer poured from a human-skull-cup into the cups of devotees who drink it as something efficacious against evil. 2. a sort of potion consisting of the ten impurities, viz., five kinds of flesh (including human flesh), excrement, urine, blood, marrow and (more Tibetan characters I can't make out) (semen) all mixed together, trans-substantiated by charms into (Tibetan characters) bdud-rtsi the potion of immortality, a small quantity of which is tasted by the devotees with the lama at their head. This drink is considered of great importance by the mystics who seek to obtain gifts of witchcraft; hence every offering is sprinkled with this potion.

I couldn't find the right accent for a couple of those Tibetan characters, nor figure any accents for the romanised terms. At any rate, there's a sample of the gems you get when you randomly open a dictionary. First printed 1902, and this is a reprint, not a new edition. It shows.

These two books I bought from a book shop by the Boudhanath, the heart of Little Tibet in Kathmandu. A couple of monks were going through every single magnet the shopkeeper had when I wandered up to the counter. There were a lot of magnets, but I don't think they were pressed for time.

When at last I found myself roaming Kathmandu alone, my companions having departed for the airport one by one, I was almost immediately sucked into yet another bookshop; Vajra Books in Thamel. Spent a good hour in there, just looking. It's funny how you can find home in strange lands.

After much agonising, I came away with;

They're reprints of journals, accounts and diaries of Europeans who explored Tibet, back when the land was sealed not just by mountains but its own choice. Bower and Wellby I chose after flipping through the pages, but Hedin I was very excited to see. He was a very interesting personality, and more than a touch blinded by his own ambition. Unfortunately, they didn't have his accounts specifically detailing his forays into Tibet, so these are something of a consolation prize.

Fortunately, the publisher Asian Educational Services has those books in stock and available online. Maybe that should be "unfortunately". They're exceptionally beautiful editions, all of these books, as well as all the other books I left behind in Kathmandu. There's an absolute dragon's hoard of explorer logs available there. Very dangerous site. Click at your own risk.

(ETA: Oh dude. A book on Tibet by Younghusband. I'm tempted, yet pretty sure I'd find that nothing but an entirely aggravating read.)

My To Be Read Bookshelf is fucking awesome.
Posted by Tessa at 4:06 am