An unexpected parcel was waiting for me when I visited my parents. Unexpected parcels are always mildly alarming, as some part of me instantly assumes I'm going to be asked to pay for something I didn't order. Given this has never happened to me, this fear is entirely irrational. 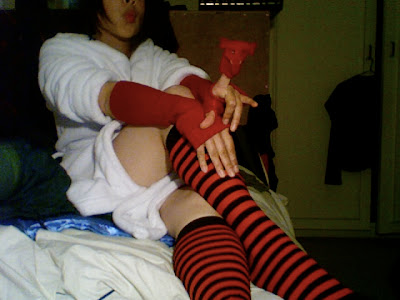 I burst out laughing when I saw the socks, in lieu of who they're from. I had the exact same pair given to me seven years ago in New Orleans, on my first solo jaunt overseas which wasn't really solo at all given the purpose of trip was to meet some people who were and still are magnificent co-conspirators.

The armwarmers are especially appreciated. Hands are aching with the return to computers, and the cold isn't helping. The line "write every day" has been sitting at the front of my thoughts, and is almost instantly followed by "except when you're hurting", which has also been every day. As such I've been looking for some gloves that wouldn't interfere with typing too much, and these are perfect. Double mwah-mwah.

Because he matched the presents so well it had to be fate, that photo is also the introduction of a finger puppet I bought in Kathmandu. Readers, I would like you to meet Ganesh, short for Angry-Ganesh-Doesn't-Like-The-Spicy-Bone-Filled-Curry-Stomp-Crash-Raaar. 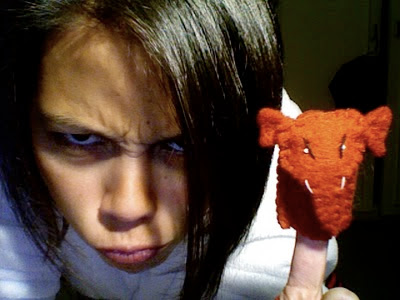 He wasn't named after a personal experience. No. Not at all. Ever.
Posted by Tessa at 10:09 am

Labels: Angry Ganesh, Blargh Puppet Theatre, gratitude stigmata, surprise, this post is brought to you by the letters O M and G, winter