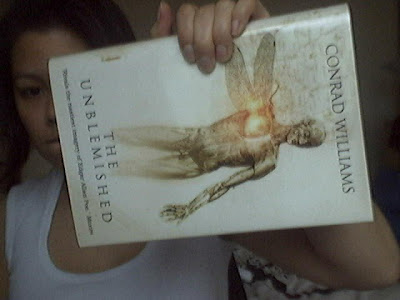 THAT WAS SCARY. THAT WAS GROSS. THAT WAS VERY UNSETTLING. All served on a 'this story is exceptionally well written and you can't stop reading it' platter. Williams is a stylist, and shows this off with careful and precise control. He does Very Bad Things and isn't the slightest bit coy about it. It's very clear what is happening, here on this page, just as it's very clear what is in my fridge - these things just are. When he throws away lines full of gore and bodies, it is not left to my imagination, I know exactly what he means, and he's made sure of it.

This is an end of the world due to uprising of unknown and hidden monster population. In the afterword Williams mentions that The Unblemished had to "be a London tale", and not something that starts in some small rural town somewhere, and he's right. There's no other way and no other setting this story could have unfolded in and still retained that sharp edge of authenticity. That a major city wouldn't notice the butchery going on within its confines until it was far, far too late is something I don't just believe, I know. Melbourne isn't even a smidgeon of London's size, but from my job I'm well aware how much can go on before any one notices something out of the ordinary. Monster apocalypse, if the monsters are on the sly and quick to learn how to camouflage themselves? Piece of cake. Probably already happening. DON'T AGREE WITH ME ON THAT LAST POINT. Which adds a huge chunk of latent fear to the whole book.

The book isn't without its hitches. While it is well balanced, there are moments of 'erm, I dunno what just happened' which never cleared themselves up. I'm still not sure exactly what occurred between Manser and Gyorsi and the fire, or how Gyorsi became Ray (actually, I just figured that out, but then why keep that face? Sarah recognised him later). And I might be touching on a cliché hiccough, but all the random females encountered were young and descriptions dwelled on how delectable they were more than any other type of person. The older asian woman with the headphones got two sentences of acknowledgment, the girl on the same train a couple of paragraphs. NPC guys didn't fare much better.

Towards the end the narrative seemed in danger of unraveling, just as the fabric of society had already done, but never actually fell apart. It ended the only way the world can end, and I was so relieved to have lived through it and be able to close the damn cover and get away from the fug of fear and horror and desperation. Yes, this book actually scared the shit out of me. I read it on the train, which was a mistake (I actually did that with London Revenant as well, which is an even worse book to read on the train late at night). I read it when I couldn't sleep, home alone after midnight, which was an enORmous mistake, as it scared the sleep right out of me, and couldn't keep from opening my eyes every few seconds because I had to be sure, you know, really sure that there was no one else in the room. About to eat me.