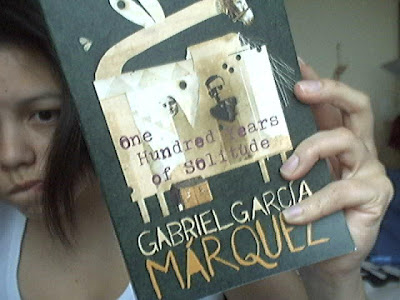 I don't remember when I first heard of this book, back in university I think. It's been recommended so many times over the years, it has always existed in my sphere of knowledge. It's lived on my bookshelves for about a year, and yet, when I selected it and opened to the first page, I discovered that I had no idea what the book was about and absolutely no expectations of my own, other than it be extraordinary.

If like me, you intend to read the book but like me have no idea what it is about and want to keep it that way, stop reading this, go out and read the book. Yes? Yes. Now be gone with you.

I did have some trouble with the names, as the family follows that fine tradition of naming their children after their forebears, and I lost track of all the José Arcadios and Aurelianos as more and more turned up with each generation, and tramped over the history of the last. Eventually, I gave up trying to keep them in order, which seemed appropriate as they barely kept themselves in order.

While the men dominate the world, it was the affairs of the women and the women themselves I loved the most. Although the family ends when the story ends, for me the true end came about with the death of Ursula. As Matriarch, she was the centre of the family for over a century, and thus the centre of the world. While her husband and sons and grandsons and great-grandsons fight wars, fall in and out of marriage, and closet themselves away in an attempt to unravel the secret of the gypsy's manuscript, she holds the universe together with all the strength and determination and thoroughness you'd expect of such a pioneer. In the last years of her life, with her sight gone and her touch with reality tenuous, she is granted perhaps the most clarity of them all. The insights she gains are those that come only from living so long, and through so much.

And, ah, Amaranta. I love you most of all.

I would comment on the theme of solitude, as it weaves in and out of the narrative, between characters, but I think the book has already said it all, and elegantly.

It is apparent, as the final sentence takes the family from existence and the town from the map that the manuscript that ensnared various men over the century is the very same book we are reading. Having read it, having taken on the knowledge it contains, we cannot unread it. The family is ended, the town gone, I cannot undo that.