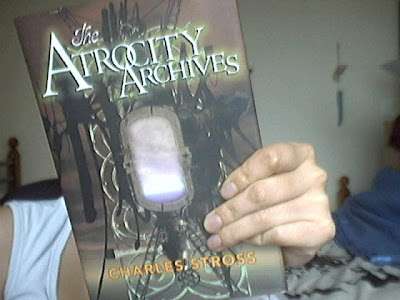 I picked this up at worldcon in LA when I was pilfering the Golden Gryphon table for Fords and Macleods and Vandermeers and this got thrown in my bootay pile as an afterthought. What with the books I'd actually sought out, I figured if it was keeping such fine company in the press, then it'd be to my taste too. Had vague memories of it being recommended.

Three years later, got around to picking it up from the shelf, discovered that, like One Hundred Years of Solitude, I had no idea what it was about or what I was getting myself into.

At any rate, sys admin versus elder god wasn't quite what I was anticipating. Nor was the prose style. In fact, it shat me to goddamn tears. Bob, being Mr Protagonist, has a singularly irritating voice that raised in me the urge to innocently ask him stupid tech support questions just to see if I could make a vein throb in his forehead. Then feed him decaf. It's a tone that never abated. I know a writer shouldn't assume the reader has knowledge of the subject at hand, but then going on to assume the reader is therefore a dumbass and needs to be spoken to in patronisingly small words isn't cool. I dun like being talked down to, and man, Bob talks a lot. Actually, he explains a lot. It isn't so much a story as a big series of explanations and recaps and summaries, whether it be of some techo-magic gadget's functions or what is going on, right now, on this page. OR NOT ON THIS PAGE, as kept occurring, all the stuff happened off page and the reader only learns everything after the fact in Bob's many debriefing sessions, and augh! Frustrating!

And yet utterly addictive to the point where I was making quick dips into the book at work, between reports. So, irritating in that just can't leave you alone and am kinda in love with you way.

Bob is an agent for a super duper secret government department which exists to prevent the world from being over run by Bad Horrible Things From Other Places as well as keep the public in the dark about these Bad Horrible Things and in turn clean up any instances of accidental Bad Horrible Things that spring up from this enforced ignorance. It's a familiar set up, so I won't go into details about the particulars in The Atrocity Archive or The Concrete Jungle, as that would just smudge the joy of wading through all of Bob's oh-my-god-i'm-so-hard-done-by-and-everyone-is-stupid narration, which is, yes, a joy. Really.

I don't know if I'd venture into any of Stross's other work, as this wasn't quite to my taste, but I'd be lying if I said I'd avoid any further Bobish stories.

Verdict: Light-hearted tongue-in-cheek fun, with a side order of frustrating. Entertaining stuff at the least.
Posted by Tessa at 8:08 am