Dave inserted some line breaks and made exquisite poetry of my noodle cooking instructions. As far as instructions went, they didn't really work, which is clearly because they were a poem in disguise. Only a highly-tuned poet whisperer could tame the beast.

The WWF sent me a postcard that was so excited about the pledge to protect and preserve the forests in Sumatra there were more exclamation marks than full stops. It's my favourite piece of charity mail I've received. It just reeks of glee. "If you pass a tree today, give it a hug, and tell it that its cousins in Sumatra are safe, at last."

(I didn't hug a tree, but I did tell the big gum out the front of my building the good news.) 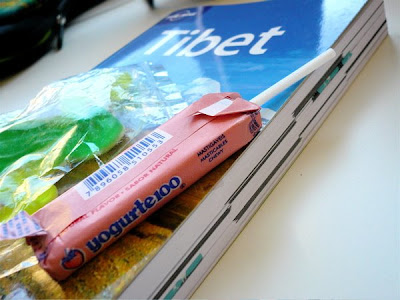 Someone at work gave me a giant jelly frog (safely contained from overtaking the world in a plastic wrapper) and an old school lollypop of strawberry and yoghurt, wrapped in wax paper. I'm quite taken with the sort of 'lolly classification' on the side there. I has a masticable!

I could hold out no more, and bought the Lonely Planet Tibet Guide. I can't not go. Managed to find a tour that does what I want and goes to (most of) the places I want to go and is listed in Australia dollars and thus won't suddenly get expensive the next time the economy has a hissy fit. Those of you with keen eyes may note a couple of sections have been taped up - they're the areas I'm not going. I don't want to know what I'm missing.

Is anyone else's heart just breaking over the Phoenix Mars Lander being swallowed by a martian winter and loosing the sun and turning its heaters off and freezing up and barely whispering to the passing trackers and dying all alone in the dark on another planet? I love those tweets, such a happy little robot, so excited to be scooping dirt around! The lander is guest-blogging on Gizmodo. Momento mori.

Labels: all mimsy were the borogoves, mars, nature is WINNAR, tibet