Too old to have imaginary friends, too young to live without 'em.

That was my last nightshift for the year, and that was the last 7wishes.

It was in its death throes in IV, but I wanted to complete the set, so to speak. One round of madness for every madness inducing shift of the year. I could go on - no shortage of ideas here - but they're getting same-same, and I'm twatty enough, and in love with the dream enough, to not want stagnation to go any deeper.

Pardon me, but that's fucking insane. Not a "wow, look at me, I'm on fiiiire!" insanity either. That's a purely "that's just plain ridiculous," insanity. And I'm daft enough to wonder why I didn't finish my novel this year. I'm giving over the writing room in my brain to the novel now. I need to finish it before I get eaten by a shark or thrown in front of a train, because if I die without finishing this thing, I will come back as a very irate ghost. Which, you know, I'd rather avoid.

But mostly I have to let them go as I'm letting a lot of the year go.

The first stories hatched on a very bad night. They were a feverish exercise in distraction, something to fixate on, to calm down and come down and give me enough space to remember how to breathe. Some of them I told to amuse myself, some of them to say things I didn't know how to say, but all of them were created because I didn't know how else to deal with grief, rage, fury, despair and horror.

I couldn't see any wonder in the world or myself, so I wrote wonder into all the places I needed it to be. I don't need to anymore. It doesn't matter how much I enjoy writing them, or how much I enjoy having you read them - these stories came from a terrible place, and I can't get there any more, and I hope I never have to again. 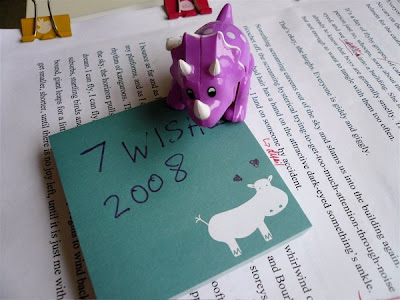 Thank you Russell, Chris, Mike, Jaime, Colin, Jeff, Terry, Nadine, Matt, Yunyu, Kirsten, Ben, Sander, Laurie, Scott, the Mysterious ~, Larry, Gillian, Barry, Stuart, Falkman, Timblynod, (holy moly there are a lot of you), Cory, Gareth, Libbette, Matthew, Gigi, Nautiloid, Ross, Selena, DS, Arthur Miller, Steve, Dave, and any one else I missed for all your wonderful comments, special thanks to Andy for saying "please don't delete them", and thanks to everyone and anyone who spent some minutes of their lives in reading.

I hope you all found something worth finding.

Labels: 7wishes, all mimsy were the borogoves, writerly stuff