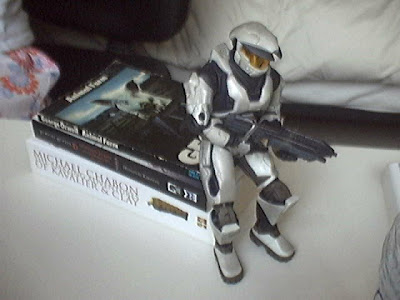 The Amazing Adventures of Kavalier & Clay - Michael Chabon
It's beautifully written, with absolutely lush characters and some balance issues. It isn't really "the amazing adventures of kavalier and clay" so much as "the self-absorbed wanderings of kavalier with a guest appearances by clay", which grated my nerves. I sympathised and admired and occasionally envied Kavalier; I liked Clay. I don't believe there is much to be gained from writing up a report on a book it took me 8 months to read, regardless of exactly why it took 8 months. It isn't the book's fault I had "issues", but it remains the book I put down and didn't enjoy enough to pick up again for more than half a year.

Vampire Hunter D: Mysterious Journey to the North Sea (Part 2) - Hideyuki Kikuchi (trans. Kevin Leahy)
I don't even remember when I read part one, but it was a looong time ago. The intervening months were no obstacle to picking the story up again. I've a feel for these narratives now, it might look like a huge and complicated cast of characters, but the actual events unfolding are straight forward. This volume in the series has the distinction of containing the first real female character. While she is seventeen (THERE IS NO OTHER AGE FOR YOUNG WOMEN), she isn't staggeringly beautiful, or depressingly in-your-face tough but weak in all the wrong cliches, not constantly throwing herself at D, not ridiculously helpess, not a mere cardboard cut out to be The Girl. And not, thank all writing deities, just a sex thang being raped or under constant threat of rape. Su-In is possibly the first real character in the whole series, and I really liked her. It bodes well for future volumes.

D is, as always, D. Without personality. Kickin' butt and takin' names and making everyone hot in the pants.

Animal Farm - George Orwell
I'd never read this before. No idea why. Just because? I wanted to, but it didn't seem right, going out and buying a new one and Mum and Dad's copy was who knows where in all the books in the house. I pounced on this twenty-something year old copy that Paul was getting rid of, and the book-fetishist in me had a tizzy fit because it's the same design as my version of 1984. They match! They can hold hands and get the same hair cut and look good together!

At any rate, I almost didn't need to read it, having absorbed the story and its lessons via osmosis over the years. I don't feel I've much to add to the discussion regarding the story, so I shall refrain. It's a classic, hefty but tight little book, and utterly depressing. I took great delight in stirring Mum up by reminding her that BOXER DIIIIIIIIIIES.
Posted by Tessa at 5:51 am