This would never happen with TV.

More busted sleep and strange dreams. I was too hot and too cold. The extra quilt they provided was lovely and snugly, and the mountain night was very cold. Rice paper sliding doors, they do a whole lot of work keeping the night out. Not bad for a sheet of paper.

Breakfast was slightly different. For a moment, I thought they’d prepared me a special gaijin breakfast, since fried egg and ham featured, but a few other trays in the common room had the same. No mushrooms this time, no lovely hot tofu either. Weirdly, the Japanese can’t do salmon. If it’s raw, it’s fine. But when it comes to cooking it, they only seem to know how to bake the crap out of it, till it becomes a dry hard biscuit. There was a little cup of black beans included, the same that was served at the temple on Koya-san, Shojoshinin. They’re not quite red beans, but still sweet and tasty.

I decided an early start would be best. This called for a concentrated dezombification session, which was aided by the other guests in my corridor thumping about with great glee. Someone or something regularly thumped my wall in passing. I never figured out what it was, the whole three days.

Quarter to nine, I checked out. Go me, the early bird! Shuttle bus to a connecting bus to the station, not so early. Nine thirty. Erm. Well, I was on the ball anyway. Bus free, can’t complain. It dropped us off at a sort of information centre in the middle of nowhere, with a great view of Tazawako. The bus to the station wandered up about twenty minutes later, and took a long winding route to the station. The buses in the area are definitely cheaper than a taxi, but they’re not really convenient. Next time, methinks I’ll hire a car. 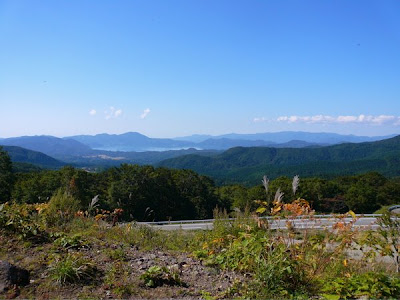 (Tazawako in the distance, while waiting for the next bus.) One of the small failings of some of the non-central stations that serve the trunk shinkansen lines is that they only have one ticket window. As in the case where a bus dumps a load of tourists heading out at the station 10 minutes before an outbound shinkansen is due to arrive, and only a couple of them actually qualify to use the reserved seating machines, I spent a rather tense 10 minutes waiting, acutely aware that there was a little old person in front of me, and little old persons and ticket windows have a magical connection for taking a looong time. As it was, there were no seats left on the train back to Morioka, and standing room early. I made it to the platform with only a minute to spare. Even though these stations have multiple staff on, there seems to be only one terminal available for the issuing of tickets. Mrrr.

Given the transport hopping tomorrow would involve, I decided to sent my rucksack on ahead again. Poor green rucksack. It probably has abandonment issues now. There seems to be one main luggage forwarding company. No idea what it’s called, but the symbol is easy to spot; a black cat holding a black kitten in its mouth on a yellow oval. Only having the address of my Mutsu hotel in English, I figured there was no point in trying to send it on from Tsurunoyu. As it was, the woman at the counter gave me this look of ‘oshi-‘ when I gave it to her, so I ended up sounding it out.

It doesn’t take much carrying around of big heavy bags to undo a day at a hot spring.

Shinkansen to Hachionhe, limited express to Aomori. I could barely keep my eyes open on either. Clearly, I’m doing this all wrong. If only I’d planned an overnight train into my itinerary! That’d cure all my sleep woes in one fell swoop.

Aomori is right on the bay, and from the station I could see an enormous cruise ship, and the bay bridge stretched across behind it. Throughout the afternoon, I’d hear the odd trumpet of ships, coming or going. Apparently the city was bombed to bits during the second world war. It doesn’t have the narrow streets of the older established cities.

My hotel should have been close to the station, and was in my LP for a change. Ai. Me and LP maps, we just don’t get along. It looked straight forward on the page, but not when I tried to follow the route I’d picked out. Eh? I just don’t have a sense of distance or size when it comes to reading the LP maps. I walked right past the hotel, looking for a street to turn down, that I’d already crossed a block ago. It was only after sitting down, and staring at the buildings around me, finding landmarks, that I realised what I thought was a ten minute walk was actually a one minute walk.

I was still early for check in, and set myself a time killer quest of finding the post office to restock my dosh. There were two on the LP map, and I chose the one that was easiest to get to. Not the closest, the one with the least complicated route. Good, sound plan. ‘cept that post office didn’t exist. Mrrrr! Fortunately, from the site of the non-existent post office, the other post office was easy to get to.

This hotel looks very daunting from the outside. The façade is grand, and I am scruffy. And getting scruffier with each day. The room is about perfect though. Not as cramped as the business hotels, or as pointlessly roomy as the resort. But, no wireless. Le sigh.

While it was still open I visited the tourist information centre, to confirm the bus and ferry timetables I’d need tomorrow. The staff there gave me a momentary heart attack, denying the existence of one rather crucial bus. A false alarm, phew. They showed me official timetables confirming the information I had, which is a huge relief. There are easier and simpler ways to get to Mutsu, but this route gets me in some coastal sightseeing that I’d otherwise miss. I also confirmed the train time, and the lovely man at the ticket counter gave me a copy of the timetable, and realising I couldn’t read any of the place names, highlighted the stations and times and wrote the English translation. 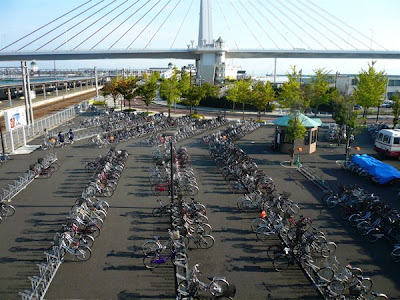 (Bicycle parking lot outside the station. No carpark to speak of.)

I had a poke around a department building, and ended up buying two books which I will never understand. One because it looked interesting, the other because the cover alone was beautiful. The Japanese are onto the right thing, having so many illustrated stories.

It turned out there is internet access available from the room, I just needed to get a kit from the front desk. Said kit is a dial up modem. What country am I in? What century am I in? Dial up? Dude, even Australia has left dial up behind, and we’re in the Stone Age regarding the evolution of the internet. Still, better than nothing.

It worked for half an hour. Then went away.

No amount of resetting, unplugging, and generally fucking around with stuff has been able to resurrect it. I’ve decided that internet access should be a standard feature to be expected in any modern hotel, as much as TV is. More than TV, even. Call me a whiny bitch, but I’d rather stalk my possee online than watch yet another cooking show.

To avoid sinking into a techrage (I haven’t had one of those for months, now I think about it, my techbits must be behaving), I went out for dinner. There was an Italian place by the station I’d noticed in my failed attempt to find the first post office, and oh yeah baby! Spaghetti bolognaise for dinner!

As much as there is a large variety within Japanese cooking, the taste spectrum is quite clearly defined. The flavours are restrained and quiet, apart from the pickled goods. Pickled apricots are like having the piccolo play a high E on the tip of your tongue, and wasabi does the same but in your nose. Spaghetti bolognaise is a big loud sassy mouthful. Definitely not the best pasta I’ve had, but since I hadn’t had anything like it in a month, it tasted fucking fantastic.

(Before anyone shoots me down, I confess I haven’t had any curry yet.)

I suppose I’ll attempt an early night. Definitely an early morning tomorrow.
Posted by Tessa at 10:08 am