Well, this isn’t panning out quite as I expected, but it’ll do.

I’d already fallen into holiday-from-holiday mode yesterday morning. I slept in, checked out as late as I could, dumped my bags in a coin locker so I wouldn’t have to carry them around, and had a long lazy lunch. Didn’t leave the Morioka Station area, just had a little mozy around and generally exerted myself very little.

I think chicken sashimi was involved in my lunch. I didn’t realise it when I ordered. It looked and felt like raw chicken, but I have no idea what raw chicken actually tastes like, so I can’t be sure. It failed to kill me.

Hopped on a short shinkansen to Tazawako, a lake in the Akita prefecture. There’s supposed to be great hiking around here, but hiking is most certainly not the point of this exercise.

There were buses connecting to buses that would get me to Nyuto Onsen, where Tsurunoyu is located. Fah! Time to be pampered and lazy. I took a taxi. I figured it would be around 5000 yen, and I was on the mark. The onsen is nestled in the mountains, and the area is just beautiful. When the leaves change in a month or so, the place will be incredible. The mountains are steep and lushly forested, with elms, I think.

The taxi driver pointed out a great view of the lake. I feel a bit guilty for not checking it out. He dropped me off at the front gate, directing me where to go for check in, all the while looking at me out of the corner of his eye. Or, not looking at me. He wouldn’t face me, and wouldn’t quite make eye contact, as if directly acknowledging me visually was a bad thing. Most unusual.

This minshuku is about as rustic as I’m going to get. Old, worn, and settled wooden buildings sit comfortably together, with steep thatched roofing for the snow in winter. There is absolutely no English signage at all, anywhere. I wandered in, and just asked where check out was.

I don’t think they get many gaijin staying here. They exclaimed, and keep exclaiming, with great astonishment on discovering I was from Australia. Made a great fuss over it. They gave me a great sort of tutorial on how Japanese accommodation works, with the shoes and the slippers and the futon and yukata – I wanted to tell them I’d already been in the country a month and they didn’t have to worry about this, but that’s beyond my language skills. I managed to pick up the basics; where the female baths where, what time dinner and breakfast were served, and left it at that.

My room is lovely. High wooden ceiling over an 8 tatami mat floor. The sliding doors have cranes printed on them, and I have a little seating area by the window that looks out into the forest.

I admit, I was a bit nervous heading out to the baths. Although I knew what etiquette was involved, and could recognise the character for male and female, the initial fuss the staff made had thrown me off balance. I’m a bit like that. If no one else thinks I’m an exception or out of the ordinary, then it won’t occur to me to think of myself as otherwise. But if people point out that I’m different, well, then I’m aware of it. There were no other gaijin to be seen, at all, anywhere.

But, baths. You know. Important.

The first bath I found was a rotemburo, an open air bath. There weren’t any showers around when I looked, but that didn’t seem to stop various other women from just stripping off and getting in, so I did likewise.

Oh wow. The water was a milky white, piped in straight from the spring itself, and steaming heavily. It was the perfect depth for sitting in, and full of smooth rocks that were surprisingly comfortable. I sat until my fingers went wrinkly and my head pounded from the heat.

Maybe it was the heat, but I left the bath in a thick stupor. It’s only a short walk back to my room, but I was in such a daze it took me a while. I wanted to do nothing more than lay down and have myself a nap, and I had absolutely no inclination to fight that urge. I couldn’t even be bothered getting out a futon. The seat cushions were good enough. I lay them out, flopped over, and didn’t move for a couple of hours.

Not sleeping, oh no, we don’t sleep in this country. But not moving and very comfortable.

Tatami mats smell of clean fresh hay. I like it.

Eventually, with the sun ducking behind the mountain, a chill crept into the room, and I roused myself. Along with the yukata they provided a thicker soft woolen kimono, which was lovely and snugly to wear. Not quite time for dinner, which means time to kill.

This was a smack in the face with a cold fish. I’d given myself these days to chill, and while I do intend on bath hopping quite a lot, I won’t be in the bath for every waking hour. I’d planned to catch up on all the photos I’ve yet to transfer and edit, do some writing, maybe watch some DVDs. This require computer. Computer require power. Ergh? I don’t have anything else with me to fill time. I don’t even have a book.

Fortunately, after several trips around the room over turning and poking behind what few features the room has, I found something that is kinda sorta a power point, for a battered old heater that isn’t plugged it. Shonky looking. I tested it on my phone first, and lo! There was power. Crisis averted.

Dinner was served in my room. They knocked on the door and brought in a large tray cluttered with various dishes, which looked a feast. Then another man brought in another tray, augh! This with rice, stew, soba noodles and what they said was a broiled fish, but it looked grilled to me. More food than I know what to do with. This man initially asked if I was from Hong Kong, and then also made a huge deal about how I was from Australia, and explained all the dishes to me, again. 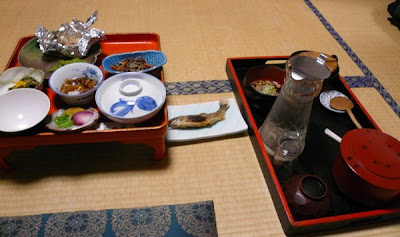 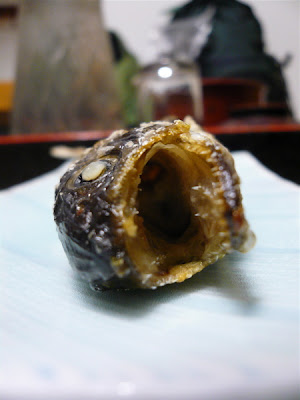 I did not eat the fish’s face. Just the rest of it.

The stew turned out to be, haha, mushrooms! I’d left it till last, since it was in a very hot iron pot. I’d already been seduced by all the mushrooms, I felt they were laying it on a bit thick. Also, I was already full. I did my best. Phwoar. Big tummy.

With my phrase book I puzzled out my room name from what was written on the key, and successfully called the front desk to tell them I was done. Mr Man returned to take my trays, and made up my futon for me, going on again about how I was from Australia.

I snuck out to the rotemburo again. It was empty, and I had myself another soak in the dark. Mmmm. 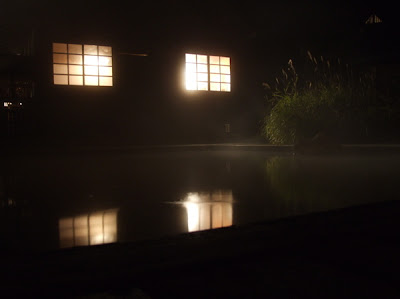 At this point, the lack of shower bothered me a bit. While the baths are absolutely delicious, they leave your skin tacky with minerals, and smelling faintly of rotten eggs. Not the most attractive of scents. At this point, I was far to mellow to stress about it much. I made a slug of myself in bed, and watched DVDs until people stopped tromping up and down the corridor outside my room.

Strange sleep. Up and down and in and out sleep. Strange dreams.

Breakfast was served at 7. Alas, there go my plans to sleep in. The morning chill was intense, so huddled in the thicker kimono I trundled down stairs to the large sitting room where communal breakfast was set up. Mr Man spotted me, laughed at how bleary I looked, and showed me to a single seat cushion and tray that was mine. Again, he explained all the dishes, again, I wished I could tell him it was okay.

The other guests, they kept looking at me. Not subtly. Can’t say I really need the extra attention first thing in the morning, but at the same time, first thing in the morning I’m too out of it to care. Thankfully, breakfast wasn’t as full on as dinner was. There were still many mushrooms involved, and one dish that I actually didn’t like. First time that’s happened yet. That clear viscous sauce featured again, and I don’t think I like that either. It leaves an unpleasant aftertaste.

I retreated to my room and zombied. Have to get that out of my system.

I tried out a different bath this time, one I had vague recollections of being pointed out as having ‘shower, shampoo’. It was a small indoor tub, and yes! A shower and soaps hidden in the corner. Excellent. It was empty, so I had myself another long soak before actually getting clean and not smelling like rotten eggs. Mmmmm.

Soon, I imagine the staff will want me out of my room so they can clean it. I think I spotted another rotemburo for women while sticky beaking out my window, this one an opaque eggshell blue. I hope they don’t expect me to leave the onsen today, because I have no intention of doing so.
Posted by Tessa at 11:06 pm