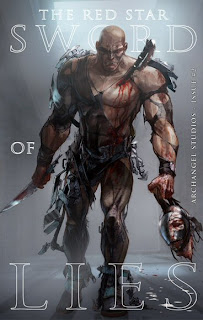 Is that issue #2 of Sword of Lies, the latest installment of The Red Star? Why, I believe it is!

When did issue #1 come out? Oh, October last year.

This comic series, it tests my patience. I vow, each time I remember to check up on it and discover that NO the next issue isn't out yet, to forget about it, and just buy the collected book when it comes out. Which, at this pace, will be when I'm wrinkled and shriveled and too blind to read it.

But I'm weak, and when I saw this on the shelf, I snatched up and clutched it, yes preciouses, it is ours now, preciouses.

The Red Star is a retro-futuristic industry-punk story about ghost possees and pseudo-Soviet Russian states tearing themselves apart in a revolution full of enormous clunky machines and cyber-sorcery. I've said before that it is a body of work that isn't derivative, but will be derived from, and I still stand by that.

The last few issues, however, haven't been great. The plot has been bogged down by action. The artwork for said action is amazing, but enough already! Get on with the siege of soul cages and sky furnaces and end of the world!

Sword of Lies #2 leaves all that behind. That was great. The balance has been restored between art, action and story, and I popped out the last page feeling satisfied and excited, as opposed to incredibly fucking frustrated.

It also has the potential to stand alone, so anyone of you who have considered sticking your nose in this series, Sword of Lies #2 is a good litmus test.
Posted by Tessa at 4:17 am