The older Tessa has learned a lot since being the younger Tessa, but she hasn't learned how to change.

Here's to secrets you didn't know you kept until you couldn't say them out loud.

EDITED TO ADD: Thanks for the happy happys, but IT IS NOT MY BIRTHDAY. This post is about something that happened that I should probably be over by now, but apparently I'm not. There aren't any happy happys here.

However, if you want to keep going with the birthday thing, chocolate cake is prefered.

EDITED TO ADD SUMOR: See, this post wasn't even supposed to be this post. It was supposed to be another post that is still sitting in my drafts folder, which was much more thought-provoking and made a hell of a lot more sense. Really, it was going to change your world. I thought it was just something that didn't come up in polite conversation, or impolite conversation for that matter. Yet when I went to publish it, I couldn't. Turned out it was a secret.

Which isn't what I want it to be, but oh well.

EDITED TO ADD EVEN MOAR: I've been pondering this birthday that isn't my birthday (being as I'm at work, and thus have plenty of processor space to ponder such things), and I think you guys were onto a good thing. Unexpected birthday wishes are alarming at first, and then kinda warm and fluffy, like getting extra. So here's what I think; everyone should be allowed one day a year to declare birthdayness when there is no birthday, for the sole purpose of reclaiming an otherwise unwonderful date. Does that sound fabulous? I think it sounds fabulous. And since today is my not-birthday, then it is only fitting that I order indian for dinner, and not eat the leftover pasta that has defrosted and been sitting in the fridge for four days, which has nothing to do with my declaring this so. Nothing at all. I swear.

EDITED FOR FURTHER PROOF OF FORESIGHTEDNESS: 'course, you can't have a not-birthday without birthday drinks. Good thing I bought a new bottle of Baileys on the way in. Premonition of alcohol required! Vexedness of lack of durnkness the previous night entirely irrelevent! Of course, I won't be able to touch it till I get home, and that won't be till after midnight, when it will no longer be my not-birthday, but you know what Winston Churchill said about never surrendering.

EDITED FOR SECOND THOUGHTS: The Baileys might not be such a good idea. If the bogans see me sitting on the train with a bottle of booze, they'll mug me. Maybe some creative shuffling will fit it in my bag...

EDITED FOR REASSURANCE: Bogans did not mug me. This not birthday is not over. More shinanigans in the morning.

EDITED FOR CLOSURE: It was only after I'd started on an enormous glass of Baileys, and thus disqualified myself from late night driving, that I realised I had no birthday cake. Calamity! Not that there are any 24-hour supermarkets in this area. I made do with what was to be had: lamingtons.

We didn't have any birthday candles either, so I made do with what was to be had: a box of lantern candles from Malaysia that aren't supposed to drip wax and have been in the kitchen drawer for longer than I can remember. 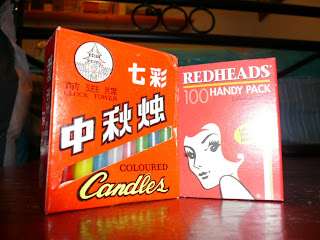 And then I got a bit carried away with the candles. In my mind, I was constructing a Lamington Fortress.

And then I set it on fire. 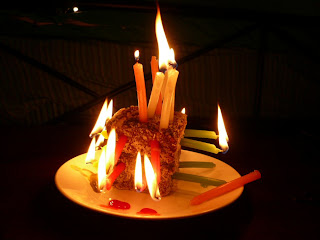 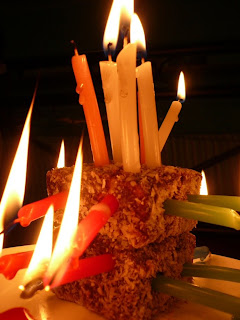 Apparently, lantern candles don't drip only if they stand vertically. 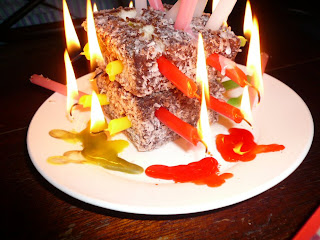 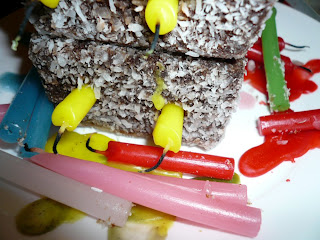 What does that make me? Big goddamn hero.

Birthday cakes, whether or not it be your not-birthday, whether or not they be Flaming Lamington Fortresses, aren't supposed to be eaten alone. Unfortunately the house had gone to bed hours ago, so I gave in and shared it with Sam, who had been watching the whole mess with the intense focus of a Dog Who Has Maybe Noticed Food And Is Being A Very Good Boy. He was quite pleased to take part in the Flaming Lamington Fortress, and afterwards did this; 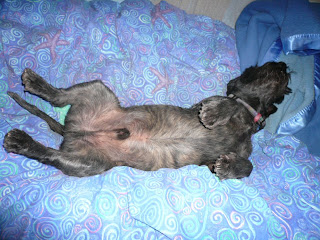 Can't argue with that.

Properly inebriated and caked, I spent the small hours watching bad movies, and failed to become maudlin, and didn't brood even once. That right there is an enormous and out-of-character accomplishment.

Now that this post has stretched over 24 hours, I think it's time to let it rest. Thank you, the three gentlemen who wished me happy birthday, and spawned it all.

I consider this not-birthday a raging success. Same time next year?
Posted by Tessa at 1:12 am