The internet is being present-giving on this fine Saturday morning. 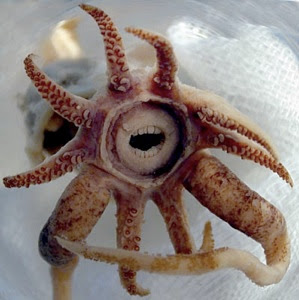 Fangs are for making nervous. Human teeth where there should be no human teeth are for making screaming and running away actions. And then coming back to oggle the photo again, and again. That's fabulous. Why are all these monsters tiny? They should be the size of fat cats! WHAT IS WRONG WITH THE WORLD.

And now look at this: 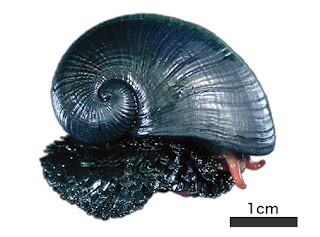 From JAMSTEC: Scaly foot--a spiral gastropod clad in iron sulfide scales. Found only in an extremely limited region of hyrdothermal areas within the Indian Ocean, which is called "Kairei Field". As the name suggests, this creature is covered in rugged scales that protect it from predators. How it actually creates its iron sulfide scales, however, is not yet fully understood. A JAMSTEC research team succeeded in observing the creature in an onboard tank for the first time in February 2006.

It isn't a snail with a house, it's a snail with a fortress. How very rocking is that? Said snail doesn't have a name yet, and is also only a centimetre big (WHY? WHYYYY?). This popped up in the gears_and_steam LJ community, of all places. Scienceblogs.com has a deep! sea! news! blog, and I never knew! Oh frabjous day, callooh, callay! She chortled in her joy.
Posted by Tessa at 12:30 am