The VanderMeers took me on an excursion to the St Marks National Wildlife Refuge, for a 5 mile hike through the wetlands. It was perfect, and I could go on at length about the beauty of the park and flood you with too big, badly edited photographs, but instead I am going to share one incident.

We were walking by the larger lake, watching a clique of ducks set out from the shore. Tubby little black birds, they moved as a very tightly huddled group. Our comments scrambled mid-sentence as a much larger bird came flying in low to the water, a deep wingspan and shining white head.

And not just a Bald Eagle, but a Badass Eagle (hereafter referred to as "Beagle").

Defying the laws of physics and matter, the ducks drew even closer together as the Beagle strafed over them. They paddled about in a panic, the flock splitting to confound the Beagle then unifying as the Beagle drew up for another pass. The Beagle hovered and feinted a couple of times, but the ducks remained united.

Fred decided to stick it out alone, and the Beagle figured if Fred was goinq to make things easy for him, he was okay with this. The Beagle dove down at Fred! However, Fred was a canny duck, he was all, "AHA! You shall not catch me!" and dove under water.

The Beagle, who was old hand at all this, was all, "Whatevs, you're gonna come up for air soon," and without further waiting the Beagle plunged into the lake.

Where, it must be said, he floundered about not at all unlike a graceless chicken, to the point I turned to ask my companions if he was in fact stuck and goinq to have to wade over to the shore to get out.

I did not give the Beagle enough credit. With his mighty wings he broke free of the water. 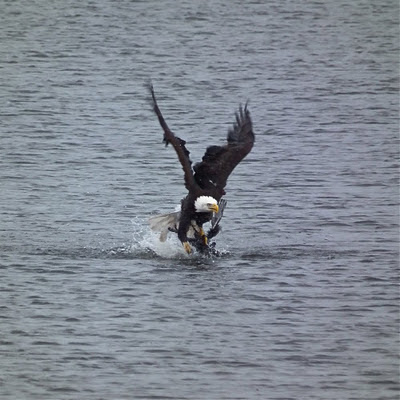 Nature is badASS.
Posted by Tessa at 1:34 am

Labels: bald eagle, florida, nature is WINNAR, photography, this post is brought to you by the letters O M and G, travel