There is no middle ground with memory and iPods at the moment, the jump goes from 60GB (which is too little) to 160GB (which is waaaaaay too much). As such I hit the nearest Apple Store and made an appointment with the Genius Bar with hopes of resuscitating Hal, because I am traveling and in transit and I bloody need all my music with me at all times.

They had some massive global infinite database which, when Hal's serial number was entered into, produced his date of purchase; 24 December 2006.

He really was dead though, and I wasn't interested in spending heaps of money on a new shiny thing, so I then visited a second-hand dealer, and found a 120GB classic for significantly cheaper. Still money I wasn't intending on spending, but not a frivolous purchase I think.

Hal IV is all set up. Before syncing, 'Owner's iPod' indicated it had two songs stored upon it. 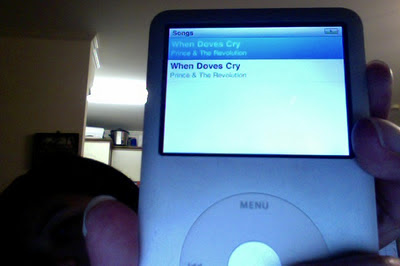 Labels: music, this is the future, we have the technology