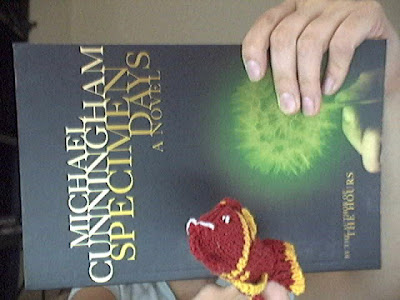 Le Red Fin is not having a little apoplexy this time.

I have mixed feelings about this book. This is seeded mostly in the author's note prefacing the story, in which he discusses accuracy. After touching on both writers who remain slaves to proven fact and those who take fact as being a guideline and 'make things up' he states the following;

Specimen Days falls somewhere between those two poles. It's semi-accurate. To the best of my ability, I've been true to historic particulars in the scenes I've set in the past. But it would be a mistake on the reader's part to accept any of it as literal fact.

It felt needless and patronising, to say the least. Of course it would be a mistake for the reader to take this book as literal fact: it's fiction. Is this capital L Literature at work, that they assume their readers need this pointed out to them? Is it simply because I've mucked about in genre I can distinguish between fact and fiction?

The story is broken into three stages, - In the Machine, The Children's Crusade, and Like Beauty - three periods, three sets of events and characters. The character names, and to a lesser extent, the roles they play in relation to each other and the world around them, remain the same. It's a sort of memetic reincarnation, which I've seen before, the first example that comes to mind being Kim Stanley Robinson's Years of Rice and Salt.

The thread that ties these three stages together is the poetry of Walt Whitman. I can't claim to be familiar with his work, but that didn't hamper immersion in the story. He's quoted liberally, where necessary, when needed, and his voice adds a lovely otherworldliness to the text.

'In the Machine' follows Lucas during the industrial revolution. His father cannot work, his mother is bed-ridden, his brother is dead and it falls on him, small strange Whitman-quoting boy, to provide for his family. He wanders around New York like keys on a kite, and lightning finds him, although others would be pressed to see it. It's a beautiful and surreal piece, and I loved it.

'The Children's Crusade' follows Cat during some present day New York. She takes calls from attention-seeking nutters threatening to blow things up and kill people. Due to chance or fate, one call she takes is legitimate, from a boy who sees the world through Whitman's words. His entry into her life sees her take apart her life without much fuss.

'Like Beauty' follows Simon, a not quite cyborg, through some future New York. Whitman seems to have been implanted in his brain, along with some impulse to go here, on this date. As an outlaw, with slave alien lizard and young boy, only human, they go, shaking off all the bonds civilisation would lay on them.

Yah. 'In the Machine' and a couple of paragraphs of 'The Children's Crusade' are the only sections requiring historical research and verification. And not much, at that.

It's beautifully written, and does have a delicate scent of the strange to it. Not the other, that is too great a distance. Strange is a word like nice, used so often we forget what it means. It's an overlay across an ordinary world, made strange because we choose to perceive strangeness. The characters are fast-drawn and fast-embedded, I'm still enamored of Catareen, the lizard woman of so few words.

And yet...I don't know why the book was written. When such a structure is set up, an arc within an arc stretching a theme across time and lives, I expect...I don't know. Perhaps some final revelation, maybe the greater secret, or maybe even better, a greater mystery. Yet when I finished, and closed the book, I felt nothing. No elation, no satisfaction, no melancholy, no disappointment. The layers that were added, carefully, building higher and higher, added no further message than that which was revealed in the first few pages. And so, while I loved the book while reading it, I do not know why the book was written.

I suppose, if I were to take a not-particularly-well-thought-through stab at it, I'd say it hinges on Whitman's ideal, that of transcendence. In each stage, the characters come a little closer to transcendence, in their own ways. Their individual fates, however, do not speak of hope, and transcendence has never been an ideal that has spoken to me.

Verdict: I loved it while I was reading it, and large portions of it remain with in me, but it didn't leave a strong impression. Perhaps the message was outshone by the characters. Perhaps it's a sleeper text, and will rise up to occupy me months from now.
Posted by Tessa at 6:20 am