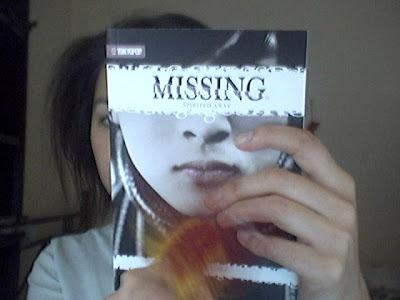 Le Red Fin did not wish to be in this photo. Le Red Fin is having a little apoplexy. Like Kermit. Only red.

I picked this up because I was on nightshift, and it was small, in both the physical and mental sense. It did the job; kept me awake on the train without asking anything of a mind that had nothing to give. Aaaand, that's about it.

Story is simple; school kid gets abducted by ghoulies into spirit world, his friends work to get him back. They're of that breed of japanese school kid that is rife in pop culture, with nothing to set them apart from any other japanese school kid in extraordinary circumstances I've read about. Prose was lack-luster, revelation of secrets so-so. A lot of time is spent talking about how awesome and amazing and brilliant the missing student is - at least, I assume that's what the intent is. Despite only being spoken of in admiring terms, the impression I received was that he's kind of a prick, as such, I didn't really care if they found him or not.

It did have the odd nice moment, especially with Miss Cranky-pants (as I came to think of her), but not enough to make the book worth it.

The series continues, but I don't really feel the need to continue with it.

Have to say, though, Tokyopop make really nice little books. They fit beautifully in the hand, nice paper, and nice interior designs. More books need pretty margins, sez I. I keep buying these novels because I know that there will always be an appetite for small books, when the brain is done with big ones.