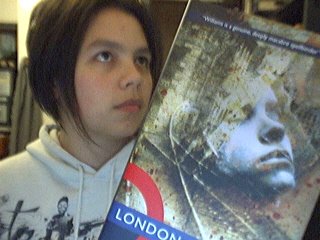 So my mouth and nose aren't the same shape, and my eyes are open. And I'm not the cover of a horror book. Thankfully.

One day, I will pay attention to my reading history, and learn from it. I will not, for example, start vampire books in the middle of the night. Or, in this particular case, start a horror book that concerns itself with people on trains, while standing on a near empty platform in the middle of a night, waiting for the last train to arrive. The first chapter of this book concerns someone sneaking around platforms, pushing people in front of trains.

Riding trains alone at night is threatening enough, even though I've done it for a year now, and absolutely nothing has happened. My imagination is a busy creature. I had to stop reading.

London Revenant follows Adam Buckley through his every day life, and in doing so explores the urban decay of the city, and the inner decay of its inhabitants, and the slippery nature of identity. Adam himself is a lost soul, although I'm not sure he realises this until he isn't.

It's wonderfully written, full of grit, dirt, and harsh language. His take on the city is complex, being full of life, yet hollow and near dead as well, and he pulls it off well. The city is quite a frightening creature. It actually curbed my desire to visit London.

I was disappointed that, for a book with the Underground logo all over it, that started on trains, and talked about subways and ended underground, not a lot of time was spent actually on trains. Adam fears the Underground, he can feel it in the souls of his boots, yet rarely visits, and when he does, Williams keeps his travels short. Adam spends more time walking and driving, each a different mode of transport with separate evils and trials. Being a heavy train and foot user, I'm constantly aware of what a journey with either will entail, something I missed from this book.

Williams uses London Above and the Underground as a means of exploring identity, with the Underground acting as London's subconscious. It isn't a flattering reflection. Adam moves between the two, struggling with his own identity as the city struggles as well. To be honest, I'm not sure this aspect of the book quite fell in place for me. I reached the end, and was not clear on what Williams was trying to say. Nor was I particularly clear on Adam's reasons behind his own decision. Neither of the two identities he wavers between appear to bring him any comfort. One is always trespassing on the other, yet he is afraid of both.

This might reflect more on my own ideas about identity. Identities are fluid creatures, and we only have limited control to exercise over our own. For example, there is the me no one sees but who sees everyone else, the me I try to be, the me I actually am, and the hundreds of mes that everyone else sees. Memory will step in and influence identities. Mood will too - identities fluctuate, they shift from one to another. It is not possible to choose an identity, and that decision to be static. Identities don't stay still.

Perhaps I missed the point, and the book is less about identity, and more about finding the place you belong. Finding home.

Now that I've typed it, I'm sure that's it. The book makes a lot more sense now. The two aren't separate concepts; we try to change our identities to force ourselves to fit where we think we should fit all the time.

Piece of the book worked more than others. I never quite bought Adam's uber-alter-ego, nor the arch-villain. In contrast, Yoyo's finding of streets that weren't on the map and places of rot took my breath away. There are pieces of genius in this book, which are occasionally distracted from by chase scenes in the dark. The final climax felt anti-climactic to me, and after all the brilliance of the preceeding book, a tad cliché.

Williams is an excellent writer, and this book was, despite the willies it gave me, begun, read, and finished while travelling on trains. As it should be.

Verdict: Very cool, very fresh tasting, with wonderful likeable and loathable characters. You should see what he does to London.
Posted by Tessa at 12:58 pm