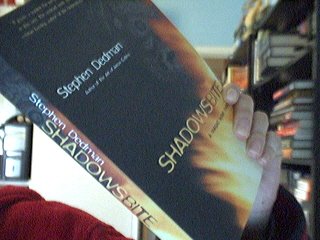 Now, if I'd know this was the sequel to The Art of Arrow Cutting I would have held off reading it. But I'd run out of junk books, and was still on a vampire kick, and the blurb just rocked, so my reasons not to read it weren't particularly pressing.

Still, it was a stupid thing to do. One day, I will not just know, but understand, that vampires scare the willies out of me, and so NOT start a vampire book in the middle of the night. I got the willies in the first chapter, and got them bad. I slept with the light on.

The basic plot is; a powerful sorceror's son goes and falls for a girl who really wants to be a vampire, becomes one, is kept around because powerful sorceror likes to indulge his son, and because vampires run amok, the vampire runs amok. Los Angeles suffers for it. An attorney, stuntman and photographer who are totally badarse find it up to them to save the day. It's incredibly fun.

Dedman's characters are fully fleshed and potty-mouthed (just how I like them), sad and hopeless and pathetic, and megalomanic and world-domineering, and even those housemates who only flittered briefly through the paragraphs were fascinating creatures all on their own. Everyone is the star of their own movie, and Dedman makes this true.

I was particularly taken with his vampire lore, and the many different types of vampires available. In this particular case, the vampire can feed by drinking her own blood, which in turn takes blood from those she shares blood with, like her parents, or anyone she'd had a transfusion from. It enabled her to kill and create without even going near her family, and came with all sorts of horrible implications that made it worse than just another vampire story. How many of you know who your blood came from? The other side of the country? Eeeee, and so it just spreads and spreads.

Unfortunately, while the whole book was great fun and more than well written, it never quite lived up to those first few chapters detailing The Photo. That photo was creepy as fuck, and I never recovered from it. Creepiness of that magnitude is hard to follow up with, and when it came down to shotguns in a cafe, the creepiness was sadly irrelevant.

(I still believe shotguns are purely for zombies.)

I'm going to have to hunt out the first book now. Drat.

Verdict: Yah, I know these aren't great write ups, but I'm reading faster than I'm noting, so I need them done. This book is great fun, a fantastic oddball take on a vampire story, and fantabulously written.
Posted by Tessa at 3:53 am