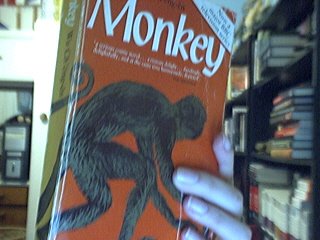 This translation was first published in 1942, and this particular reprint in 1979. You can see proof of its age by looking at the colour difference between the spine and the cover. Ah, the poor thing, it's faded despite being kept well out of the sun. The recommended retail price on the back is $4.95AUS. I wish.

After finishing Shadows Bite I'd run out of vampire books, so had to turn to the supernatural in general, still seeking out books that wouldn't in any way tempt me to alter my current writing world. I remember just staring at my bookshelves, when I should have left for work a couple of minutes prior, seeing this, and just grabbed it and running. I've been meaning to read it since I was a child. People of my generation talk about growing up on Transformers, Voltron, He-man and She-ra, and the Teenage Mutant Ninja Turtles - I remember them all, but what I adored was the Monkey series that was on ABC after school. Monkey could have kicked all those wannabe cartoons easily (and then be told off about it).

For those of you who aren't familiar with the story (you're not?) Tripitaka is a priest on a mission from Go- Buddha to fetch the holy scriptures from Thunderclap temple in India, and save all the lost souls in China. To aid him in his incredibly long journey, he has King Monkey, Great Sage, Equal of Heaven, Pigsy, Ex-Grand Marshal of all the Heavenly Hosts, and Sandy, Ex-Supreme Commander of the Heavenly Hosts. While the three of them possess all sorts of magical abilities, Kuan-yin, the Compassionate Bodhisattva, couldn't have picked less suitable dweebs. Along the way, they're beset by all sorts of demons and monsters, and Tripitaka has is work cut out for him making good buddhists of his disciples.

Unfortunatly, the first thing I discovered upon reading the introduction was that this particular version was not a complete translation - the entire of Journey to the West is some hundreds of chapters long, whereas this is much abbrieviated, being a mere thirty chapters. Oh well.

I read it anyway, and the cheekiness I thought was a modernisation designed to pander to a current TV audience turned out to be taken straight from the original story. Oh my goodness. All folktales need to be like this. It's so rude and immature, no wonder I loved/love it.

(On second thoughts, most folktales are gruesome and cleaned up for a modern audience. But gruesome is an entirely different kettle of fish to immature/cheeky/mischievious/omigod did he just DO that?)

For example, at one point Tripitaka and his disciples come to the kingdom of Crow-cock, which has come under the sway of three spirits, who in turn have outlawed Buddhism and raised Taoism high. In the middle of the night, Monkey, Sandy and Pigsy decide to sneak into the Taoist temple. They stick the portraits of the Taoist Trinity in the toilet, eat all the offerings, and when the Taoist monks come to investigate all the noise, pose as the Taoist Trinity come to earth. The three spirits see this visitation as a prime opportunity to ask Lao Tzu for some of his life elixr. The disciples decide to oblige them, and on sending them out of the room, piss in three jugs, and hand that over. At which point I was just about in tears laughing, because that wasn't the first time urine featured in the story.

The greater part of this translation concerns itself with Monkey running amok in Heaven. Heaven being something of a great celestial bureaucracy, is in no means prepared to deal with the Great Sage, Equal of Heaven, and falls apart much as bureaucracies do. The Jade Emperor's complete lack of leadership made me giggle, and their inability to do anything other than send more people to fight and lose to Monkey made me giggle more.

Interestingly, while it is evident what unwholesome qualities both Monkey and Pigsy are supposed to depicte, I'm never quite sure what the go with Sandy is. Neither, it turns out, was Waley. The TV series made him something of a wannabe-intellect, a know-it-all who doesn't, but the others are guilty of the same often enough.

(I did love Tripitaka in the book. Every time they come to a river, or mountain, or something that might be difficult to cross, he bursts in to tears and gives up all hope there and then.)

Reading this, combined with an impending nightshift, led me to go out and buy the complete Monkey series on DVD.

Alas, while there was no feeding pee to Taoists, it stands the test of time, and my god, is possibly the greatest TV series EVAH. It has a mad genius that allows for Buddhist teachings among non-stop bickering between the three.

Now I need to get myself a copy of the full translation of Journey to the West, as the transition between Cheeky Monkey to Enlightened Monkey is far too fast in thirty chapters.

Verdict: Great, great fun, terribly amusing. You'd have to have a pretty unfit sense of humour not to enjoy this, and even if you did, there's still a lot to learn about both Chinese culture and history.
Posted by Tessa at 8:06 am