Boogiepop and Others - by Kouhei Kadono, translated by Andrew Cunningham 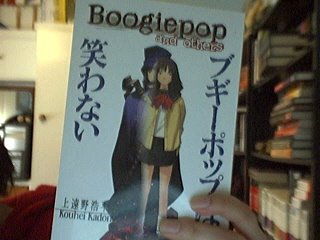 It's a weird name, I know. Boogiepop is a secret saviour, a knight who comes to the protection of the world when such protection is required. He doesn't exist outside these circumstances; he is a split personality. In his own words, he's bubbles. He floats to the surface now and then. Hence, he's a boogie...pop. Like soda.

It's a weird name.

In this particular case, he floats the the surface of Touka Miyashita, a highschool girl, who does not and never will know of Boogiepop's existance, and all the time she looses to him. As if adolescance isn't hard enough.

I first encountered this in anime form. We were sending the DVDs back to head office in an overstock recall, and I thought 'why not?' and grabbed them. Good call on my part. While the production was lackluster, the storytelling was incredible. Each episode was from the point of view of a different character, detailing an incident that was important to them. Some of the episodes overlapped, and some just passed each other by, so that three episodes later I finally understood what the two seconds of random stranger screaming on a corner actually meant. The story was a jigsaw puzzle to piece together for yourself, and by the end, I had the larger picture. Most of it, anyway. It was different, and challenging, and my god I loved it.

I've been waiting for the novels to be translated ever since then, because there were points I wasn't sure about that I wanted clarified, so I ate this book as soon as I saw it. (And also because I was still on a junk book kick.)

The anime, as it turns out, was following the same storytelling method as the book - each chapter is from a different character's point of view, and not necessarily following them through the same time period. Again, this was occasionally confusing, but the challenge of teasing out the chronology of the narrative was intriguing. It didn't turn me off, it made me work harder.

The writing style/translation was plain and simple, neither a work of art or something to be mocked. Although I would like to state that 'gotten' is not a word. Dammit. Unfortunately, for a book in which there are several POVs, and each of them key, there was no discernable difference in voice between them, something which felt like an enormous wasted opportunity.

One day, I will figure out why japanese school kids are forced to save the world so much.

Did I get the rest of the larger picture? Yes, and no. Turns out, this is one of many novels.

Verdict: Although it isn't the greatest of art works, it will offer any writer an interesting study on storytelling, and what you can get away with not saying. For everyone else, well, you probably already know if anime/manga type works are your thing.
Posted by Tessa at 3:02 am