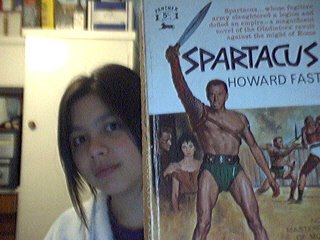 That cover is incorrect. The gladiators were made to fight naked, and Varinia is blond. Nor, I might add, does Kirk Douglas look like a sheep. Several times throughout the book, Spartacus is described as having a face like a sheep. I've yet to figure out exactly what is meant by that.

I enjoy all the books I read, but it has been a long time since a book left me utterly heart-broken and bereft simply because I finished it. Perhaps I read too much, too fast, too lightly. Perhaps I'm becoming immune to books - now there's a frightening thought. But Spartacus left me wandering around the house, grieving, because I will never be able to read this book for the first time ever again.

It isn't true to say this is Spartacus's story, but the story around Spartacus. It unfolds after his rebellion has been crushed, he has been slain, and the Appian Way is lined with crucifixions, an example of what happens to those who dare defy the might of Rome. What we see is the rammifications of Spartacus's actions on the Roman world, in terms of its society and politics. Through the eyes of a noble born youth, the general who finally defeated Spartacus, and the senator who saw what the slave uprising might trigger, the reader is given insight into what Spartacus represented.

He is only portrayed in the light of legend, as no one knows what sort of man he was. They talk about stories they'd hear, ponder on rumour and fact, and will never understand Spartacus, because they are free people who believe that it is the natural law for some to rule, and some to obey.

While they were busy trying to get inside Spartacus's head, I was putting all my effort into trying to get into theirs. The Roman mind is a strange thing, and while they couldn't fathom how Spartacus had the means, will, intelligence to do what he did, I couldn't fathom how they couldn't see it coming. It took a lot of work, but they presented their justification for slavery, and on such a scale. Something to do with a total disregard for life; the Romans appeared to be in love with death, courting it where ever and when ever; with their gladiator games, the many campaigns they waged, their politics and schemes and terrible, terrible terrible diets (tit lark tongue pastries?). They go to such great lengths to distract themselves from life, not unlike the current world.

The slave is afforded none of these distractions, and can do nothing but lay down and die, or live, and live.

There is a passage, which of course I can't find now, which described why the slaves defeated the romans so many times; they would not be defeated because they could not afford to be. They weren't fighting for land - they had no land to run to, no place to retreat, no safe haven. They fought for their lives, and so they fought with their lives. Because there was no other path open to them.

It was interesting to watch the story change focus, from being on Spartacus, to his wife, Varinia. Spartacus was doomed from the beginning, and although his ripples would last for ages, he, his comrades, and the slaves contempory to him were consigned to misery. That close in, it's hard to see the change. But Varinia was hope, and it is comfort to know hope lives on.

Fairtrax, hanging on a cross, said "I will return and I will be millions."

Verdict: Brilliant. Mind-catching. Wonderfully written, with fantastic characters and such wonderful passages. I should have marked down everything I wanted to quote. I grieved to finish this book. I wasn't ready to leave yet.
Posted by Tessa at 1:51 am