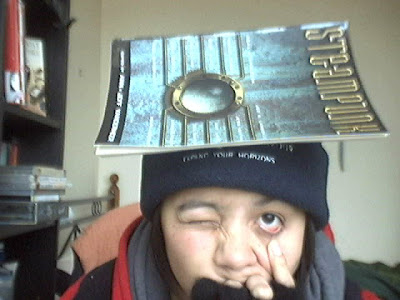 This one did not fall off my head. My tower of books to write about is sinking. The hazards are waning.

I broke with my normal rule for this one. Usually I choose what to read next by selecting something markedly different from the last book I read. But, well, I was still in nostalgia mode from reading New Weird, and thought I'd continue.

(My honour dissertation wanted to be about New Weird, but it had no such easy definition or label at the time, and I was in no position to go around making it. I ended up playing with the concept of genre cross-pollination and tore up steampunk instead, which was established enough for there to be some existing literature with which to appease my examiners.)

Again, there are non-fiction elements to the book, but I only skimmed them. This makes me a bad person, but I am not loyal to genres, and am of the opinion that they should be broken whenever the opportunity presents itself, their history be damned.

Once again, I'd already encountered quite a few of these stories in my readings, such as Blaylock's Lord Kelvin's Machine (a copy of which I found in a second hand book shop in New Orleans), Moorcock's Warlord of the Air, as well as Mary Gentle, Michael Chabon and Paul di Filippo's contributions. They're all excellent stories on their own, especially di Filippo's. If you're partial to the genre and haven't read his Steampunk Trilogy then I suggest you amend that.

Newly encountered stories varied from "yeah, s'alright" to "HOT DAMN WTF WAS THAT". Of particular awesome was Ted Chiang's Seventy-Two Letters, a story delving into the possibilities and politics of the golem, and the letters needed do describe and animate one. It's a gentile story that runs deep, and although the waters were quite calm through out its unfolding, when I reached the end I found myself entirely disturbed. Subtle tensions wrought there.

Minutes of the Last Meeting by Stepan Chapman plants Big Brother nanotechnology in Russia and lets the spirit world loose upon the country, aided by an AI doing the only thing an AI can do. Divergent streams overlap and cross to make a complex pattern. It's the surprise awesome, tucked up the end of the book.

And then there's, uh...The Steam Man of the Prairie and the Dark Rider Get Down: A Dime Novel by Joe R. Lansdale.

It's kinda gross. I mean, sickening. Even as I was laughing at the utter outrageous random WTF of it, I was wondering if maybe I was going to be sick. I actually felt nauseous. Not for the faint of heart. Or weak of stomach. But sweet blasphemy, if you can take it, it's a hell of a story. Fucking hiiiiilarious. So very wrong. It takes the gentle Victoriana trappings that steampunk usually carries, and bends them over the bathroom sink.

As with any collection, there's hits and misses. For me, there were more hits than misses. There's a lot of fun in these stories, which the world needs more of.

Verdict: I daresay you've already discovered, in the recent boom, if steampunk is to your tastes or not. If it is, then this collection is definitely worth your time. If it isn't, well, there's still nothing but quality here. (Apart from the Lansdale. Quality is a non-applicable term for what that story is. That's skullfucking. Which is still...uh...powerful.)
Posted by Tessa at 5:41 am