The Boom of Empty Minutes

The first thing Margo Lanagan did was give us writing exercises. Clarion South is six weeks of writing and criting and little else. Giving us more was a bold, some might say, reckless, move, but it paid off.

She handed out prompts and gave us five minutes to write. First we were given pictures. I don't entirely remember what mine was, I have the vague impression of an oil painting of wheat, or dry grass, and beside it some previous student had doodled a little bird in blue pen. I do recall staring at it blankly for the bulk of the five minutes. It gave me nothing.

The second prompt was a sentence, or half a sentence. Again, I don't remember what mine was, but I do recall it set my brain on fire and when Margo told us time was up, stop writing, I resented her immensely. I wasn't finished, the idea was still moving through me.

It confirmed something that perhaps was beginning to be recognised in my subconscious - the triggers for my inspiration are nested within the written word.

Sometimes, they're the same thing.

In an effort not to create internal pressure to write, I have

When people discover this I am inevitably asked what I then do with my time.

I do not want to be at work. As soon as I sit in my cubicle I'm counting down the hours and minutes till I can leave.

I do not want to be at home. I get home, and I sit, and I stare out the window, at the wall, at the carpet, and count down the minutes till it is reasonable to go to bed.

Weekends are an interminable agony. I wake, but do not open my eyes, and lie as long as I can force myself to. I take my time in the shower, getting dressed, making a cup of tea. I linger over the dirty dishes, the washing, the ironing. The grocery shopping is a slow ambling excursion.

And then, I have run out of things that must be done, and my time is my own.

It is all empty time. I cannot write. I cannot read. There is nothing else in my life.

I sit, and stare out the window, at the wall, at the carpet, and count down the minutes till it is reasonable to go to bed. Most of the time, I do not last until 'reasonable'.

Empty time is not a trial I've ever had to navigate. It's...devastating. To quote Tyler Durden, "This is your life, and it's ending one minute at a time."

To be sure, I tested my suspicions, and while undertaking Operation: GTFO III I took The Book of Imaginary Beings by Jorge Luis Borges, as yet unread. 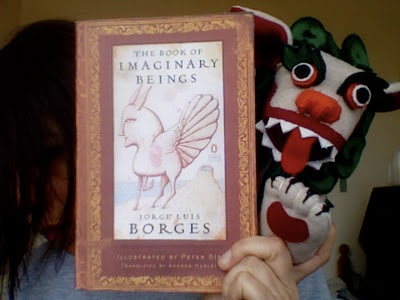 Because that's when you do on holiday; all the indulgences you normally deny yourself.

It was with trepidation and intense anticipation that I picked the book up, made a cup of tea and settled on the hostel couches. It took me some time to crack the cover. Fear of causing myself grief is no easy conquest.

And oh, it was wonderful. I read.

And oh, it was brutal. My notebook and pen never left my side, as I had to pause frequently to copy down quotes and jot down questions raised. It had be so long, too long since such nourishment. My mind devoured and tore up the paragraphs, sucked the marrow dry and demanded more, more, more, and as I had feared, eventually stopped taking, and started giving.

When I got home, I put the book back on the shelf, and stood there a moment surveying all the other glorious books awaiting my appetite.

And I had to walk away.

Logic is not without its loopholes. With so many writers in my life, there is always critiquing to do. I have persuaded and cajoled rough drafts out of a number of friends and acquaintances. That's okay, you see, because I'm doing it for someone else. It is a means of thinking about reading and writing without having to approach the subject head on. I can fool myself about what I am doing, and come at it sideways. Especially fortunate am I that I know so many fabulously talented writers; Rjurik Davidson, Deborah Kalin, Alistair Rennie, and Conrad Williams; the pleasure was all mine.

This loophole is not without its own shortcomings. Toward the end of this mad spree of critiquing some point of saturation was reached, the balanced tipped, and I found myself having to walk away frequently as a froth of bitter snarling jealousy threatened to taint my objectivity.

I do love criting, perversely so. But I love writing more, and to handle their brilliant beloved works with the aim of strengthening them when I can do nothing myself tests my altruism and the lengths of my denial.

As such, I have not sought out any further manuscripts, and empty time returned to me.

There are more loopholes to the logic. For many years I have maintained a strict philosophy regarding the rereading of books, ie, VERBOTEN. There are too many books in the world that I will never get to read, I cannot waste time rereading stories I have already known.

But, well, it is new words that trigger new ideas in me. Old words must therefore be safe.

Right? Right. Examining the argument closely would be counterproductive. It doesn't need to be airtight, just solid enough for me to fool myself.

I was tempted to do this properly, and leap on my old Dragonlance books, but couldn't quite bring myself to take it to such extremes. Instead I picked up Tad William's Otherland series, each book of which is a massive behemoth with its own gravitational pull. I have them all in lovely hardcover, and the first is signed by the man himself, in person when I first met him in LA.

And discovered that my copy was faulty, as page 81 was followed by page 52, before hitting 81 a second time and skipping on to 115.

Do you believe in signs? I try not to, but it was hard not to take that as an uncompromising statement that I am simply not meant to read.

I have borrowed a copy with the intention of reading those missing pages, but as yet have not returned to reading. Guess I'm afraid of being thwarted again. As such, empty time is returned to me.

The latest loophole I have crawled into acknowledges the difference I perceive between the written and spoken word. Most people nudge me toward voice-recognition software and I've explained many times over that in this case, it is the act of writing I need, not the end result. To speak is an entirely different action to undertake, and ignites different thought-matrices. Writing was cultivated because speaking is, for me, anathema. This blog is called Silence Without because I cannot say the things that require saying, and thus, I write them instead. Silence without, expression within. Over time, the act of writing has become an exercise of storm-appeasement like nothing else I have experienced. There is nothing that soothes the howling heart more than the formation of a sentences and the composition of a paragraph.

Audiobooks and podcasts, you are my friends.

Now going to bed before the flying foxes have started their foraging is no longer unreasonable. I lay on my back with the curtains open and watch the sky change, flying foxes heading out for breakfast, and listening to stories. I do so love being read to. There may be no quicker way to get me into bed. I've found many marvellous stories (I recommend pillaging Clarkesworld, Dark Fiction Magazine (particularly Pinborough's Do You See?) and Podcastle) and equally marvellous readers (anything by Rajan Khanna).

The spoken word triggers nothing in me. It is safe.

My hands have been very bad of late. It has taken over a fortnight to write this.

Denials and distractions; none of them last forever.
Posted by Tessa at 5:15 am