THIS IS NOT AN HONOURABLE DEATH

You may be aware that a holiday resort area in Egypt has been following the script of Jaws, with the beaches terrorised by massive man-eating shark who injured four and killed one.

The climax and defeat of the shark did not, as it were, continue to follow the script.

I'm not even going to post an excerpt, I'm copying the whole article and picture and dumping it right here, because, because...by Neptune I'm embarrassed for that poor shark. It's facing its ancestors right now.

Dragan Stevic of Serbia is the new Egyptian hero who killed a large shark which had previously terrorized numerous tourists (injured 4 and killed 1) at the famous Egyptian resort Sarm El Sheikh.

The Serbian hero was too drunk to remember what had happened, though one of his friends who witnessed the incident explained it all for the Belgrade based media.
Dragan Stevic was dubbed by the Egyptian media as "Shark El Sheikh" and thanked him for saving their tourist season.

Milovan Ubirapa, one of Stevic’s friend who witnessed the incident explained that Dragan had decided to go to the beach for a swim after a long night of drinking. As Dragan and his friends approached the beach, he saw a fairly high positioned jumping board utilized earlier in the day by divers.

“Dragan climbed on the jumping board, told me to hold his beer and simply ran to jump. There was no time for me to react or to try to stop him, he just went for it” says Milovan.
“Dragan jumped high and plunged down to the sea, but didn’t make as much splash as we thought he would”, explained Milovan. 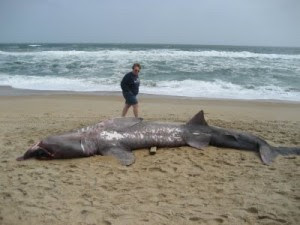 The reason could be because Dragan Stevic ended up jumping straight on the shark which was lurking near the beach, probably looking for its next victim. Dragan had nailed it right in the head, killing it instantly. The Egyptian police found the shark washed out on the beach that morning (pictured above).

Dragan was able to swim to the shore and told his friends he had twisted his ankle, telling them the water was not that soft.
The water is soft buddy, you just landed on a shark. At the moment, the fearless hero is in a hospital recovering from alcohol poisoning. After Dragan gets well, he will get a chance to have some more drinks as the resort had awarded the Serb tourist with a free vacation for his heroic deed. // Pero Stamatovski