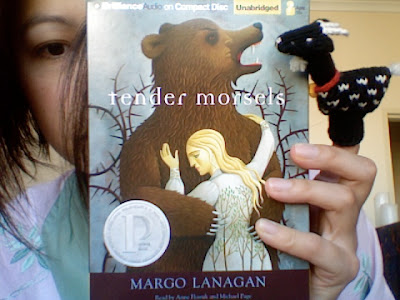 There was a lot of bruhaha in the reviewsphere about the events contained in the book and whether it was obscene material that should be burned, I say, burned, or not. I didn't read any of this, but I was aware of it. It was at the front of my mind when I started, a sort of mental readiness that what was to come was probably not pleasant (and knowing Margo's style, that's only to be expected).

And still, that first session I had to stop not because I was ready to stop reading - I wasn't, actually - but because I'd reached my horror saturation point and had to go find some rainbows and unicorns to snort.

It was quite a relief when that section passed. I almost understood, then, why the bruhaha, and having read the book do not agree with it. It does deal with some heinous crimes and taboos, but does not exploit them. Margo handles them with an honesty that makes liars of us all, she doesn't shy away from the consequences that follow such events, be they emotional, practical or social, nor does she make any attempt to belittle how lasting the effects can be on a person. The ending is better than the start, which is all that can be hoped for, really.

This is a recasting of Snow White, Rose Red, which is a fairytale I'm not well acquainted with. It spans two worlds, each with their joys and savage flaws, and some three generations of women who fit in neither world, and make their own world between themselves. It's a subtle fantasy, not feeling much need to be loud and brash in its unworldliness. The magic exists to serve the themes of struggle, defeat and the furious unfairness of ordinary people. The magic bends its knee to a story driven by characters.

The prose itself is an incredible magic, Margo having a precision of feeling in the details she chooses and the words she chooses to denote those details that stems from an almost childlike-innocence view of the world, before the rules of language dictate what word applied to what. It's through this delicate, exquisite prose that the atrocities are delivered, and I cannot tell you if that makes them easier or harder to stomach. Regardless, it made the book a wonder of craft.

(I had a moment, in that delightful warm burly section with the visit of First Bear, thinking of Florence, and oh my heart wanted...)

The end left me a touch disgruntled, as for me the story was always Liga's story, she who had endured the most and still endured against the demons her trials had gifted her, and yet, it is the best ending to be wished for. This story has its roots in a fairytale, but it is not a Disney fairytale with a happily ever after, nor it is a traditional fairytale with everyone dying horribly, in fact it's not a fairytale at all.

It's life. You don't get what you deserve. You can only make a life with what you get.

But, despite all the atrocities and scars, or perhaps because of them, this is first and foremost, a love story. This book is so saturated with love, the love of mothers and daughters, of sisters, of the family you make for yourself, it made me hurt it was so sweet.

Verdict: Exquisite. An incredibly powerful book, and so honest about the psychological and emotional scars that shape us long after the wound that made them has healed over. Do not read if you are feeling at all vulnerable.

Additional Blather: I consumed this as an audiobook, and dude, I'm not sure I'll do that again. The iPod just isn't set up to deal with audiobooks nicely. Possibly I have to rummage around for obscure settings some more, but on starting the book I couldn't use my iPod for anything else because otherwise I'd lose my place again, with 1134 tracks to hunt through, never find it again. Audiobooks also take much longer to consume. I'd have probably eaten the book in a couple of days, but this went on for about a month.

That said, it was wonderful to be read to, and the readers, Anne Flosnik and Michael Page, were perfectly suited to the story.
Posted by Tessa at 11:29 pm