What Happened Next: I did not climb a volcano.

After a couple of days being messed about by Aerolineas Argentinas, not sleeping and wearing the one set of clothes, I arrived in Santiago, Chile, exactly where I was supposed to be and although I'd missed the whole meet 'n greet trip meeting, I wasn't going to be left behind.

Being in the right country and city can be an immense relief. As a result, I felt I could stop rushrushrushing as I had been, and after fumbling my way through customs and immigration (the officer processing me refused to believe I could not speak Spanish; I disproved him with my utter bewilderment), I made my way to the shuttle bus operators. There were two options offered me, 1) collectivo, being a shuttle bus that dropped everyone off at their hotels and could conceivably take an hour to get me to mine, or 2) private, which was essentially a taxi, but cheaper. What's the rush? I chose the collectivo, and piled into a van with some Americans, Germans, and locals.

By then the sun had set, and the trip was scheduled to leave at six the following morning. I saw nothing of Santiago.

By chance I was the second person dropped off. The lovely driver pointed me towards the hotel, as by this time I was so exhausted I literally could not see the enormous lit up sign, and waved me on my way. I shambled into the lobby in my two day old funk, thinking it was actually a very nice lobby and my funk was not at all appropriate, and attempted to check in.

You see the key word there: attempted.

Reception could find no reservation for me. At all. Ever. By this point I was so immune to massive setbacks that this minor hiccough didn't phase me other than delaying me from being able to really well and truly stop. I asked if there was any room available, and whatever it was, I'd take it, by Zeus's Mighty Nose Hairs, I'd take it.

While he was organising this, I discovered the notice board, where the various tour groups departing from this hotel left their Need To Knows, and found one for my trip, with my name on it no less that said, that said, it said-

It said there'd been a change of plans and the trip was departing not tomorrow morning, but tonight at 10 o'clock, to make a 10 hour drive through the night straight down to Pucón.

What's the time? I asked faintly.

5 to 10, replied a woman loitering in the lobby. Are you with us?

At this point, I just started laughing.

And thus began my tour.

The truck managed, miraculously, to be louder than a plane, and considerably less comfortable, and by now I was so wired and my body clock so completely flummoxed as to what time it was that I still didn't sleep. I spent those 10 hours looking out the window at the Milky Way and wishing I'd had a chance to get any other clothing out of my rucksack before it was thrown in the back, because even in summer Chile is fucking freezing at night, and I was barefoot with only thin trackies, a hoodie and t-shirt on, and quietly dying of frostbite. Got very cozy with a mad irishman who smelt of spilt beer and a lack of shower because it was that or die. (I may be exaggerating there.)

Some of the shapes passing in the night nudged my addled mind, and at one of the service stations we stopped at I asked if I was hallucinating, or if there were in fact eucalyptus trees everywhere.

They're a bit of a pest, I was told. You go gum trees! We passed through bushland, a proper thick gum tree forest just on sunrise, and I could smell them.

When we finally pulled into the camp at Pucón, we bogged the truck. Instantly. 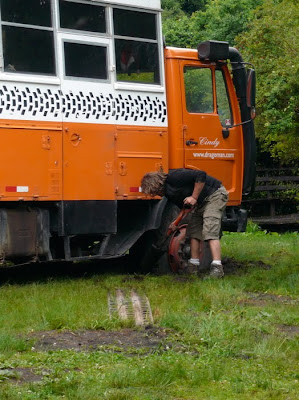 And it was raining. And I was barefoot. And cold. And very, very, very tired. And we set up our tents, in the rain. And then the boss lady said we were all going into town to organise a climb of the volcano Villarrica for tomorrow, and I had to say stop, please, can you just let me put some actual clothes on I'm kinda dying here.

Sitting in the company office and having the volcano climb explained - get up at dawn, climb this bit up to the snowline, put on crampons, climb snow all the way to the peak some 1,400 feet or metres, I really don't remember - the fact that I had not slept in three days punched me in the face, and I sat outside and tried not to vomit.

I really wanted to climb the volcano. I mean, fuck! It's a volcano! But the nausea and dizziness and weakness were signs I knew too well from nightshift. I was just too tired, to the point where I couldn't justify climbing a volcano as crazy, it would only be stupid and dangerous.

So I did not climb the volcano.

Instead, the following day I and a handful of the older people on the truck went to Huerquehue NP. Try saying that three times fast. In fact, try saying it at all.

Here, we were told, was a lovely level hike that was easy and looped through several lakes.

This was of course completely and utterly and totally and so very not true.

It began with a path through the woods by the lake. I cannot tell you which lake in all honesty, there are that many of the things around. Funnily enough, the area is called the Lakes District. It was lovely and dim in the trees. 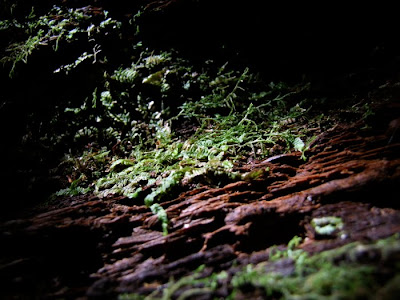 This path washed us up on the road. Which was a lovely road, and it was a gorgeous day, and there were lovely odd little plants around, and the mountains being all moody and towering above us, and the group came to understand what I meant when I told them not to wait for me as I'd be snap happy.

In particular, I fell in love with these guys. 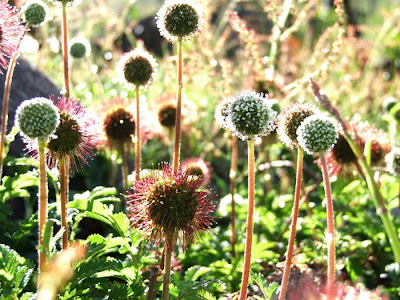 Are they not just gorgeous? They're everywhere, all over Patagonia on both sides of the Andes. Clingy and furious little buggers. I adore them. I have so many photos of them it's sad. They are Acaena Magallanes, bringing back punk, flora style. 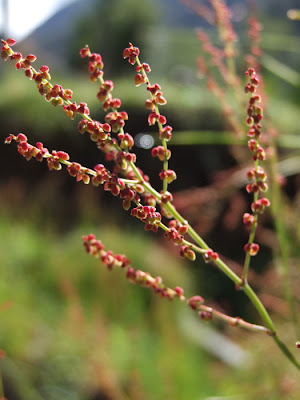 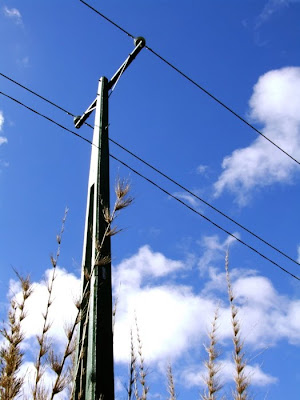 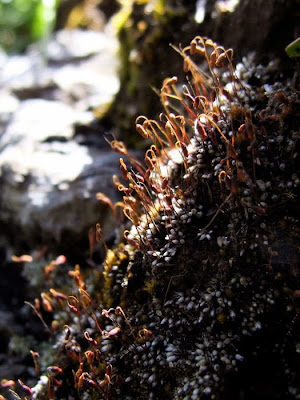 The sun was out, the sky a brilliant blue, but goblins live in the mountains. You can tell, because despite a summer day, the mountains were busy being broody and moody and gloomy and other words with 'oo'. 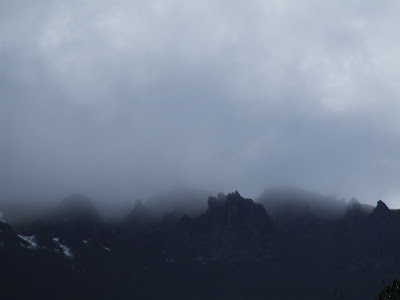 The road eventually ended and we were back on a path wending its way though sun-speared forest, the sort of thing that when I encounter in a work of fiction I don't really believe in, 'cause such idyllic scenery just doesn't happen.

Here's photographic evidence of my wrongness.

There were even motes caught in the breeze passing through the sunlight, in order to dazzle just so. Fucking ridiculous. 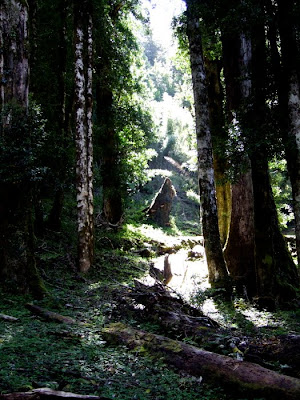 And then, THEN, we came to the trail head.
Erm. 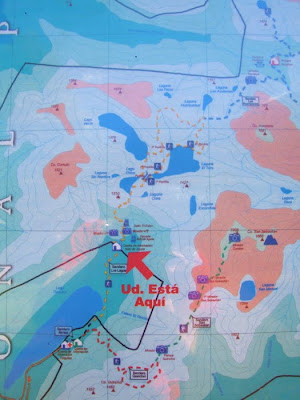 The yellow hike is the one we were doing. We'd done the walk up from the park gate, and there was still some ways to go before even beginning the loop. And it was going uphill. We'd already ascended more than we'd expected. I just feel a need to point this out, as when I looked at the map I didn't think the ascent was all that much. UH HUH.

Shortly after, we came to the first mirador (view point) of Villarrica. 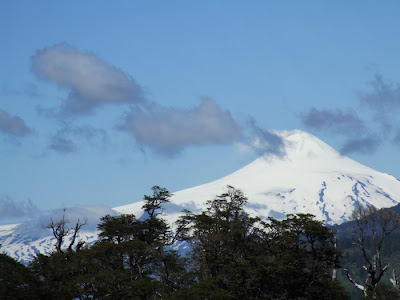 She something, isn't she? Our comrades were on that snow, somewhere.

From there on the path zigzagged up, and up, and up. There were a great many curious little undergrowth lives for me to point my camera at. 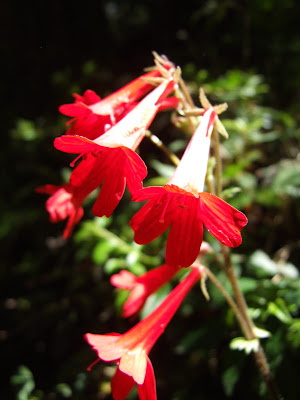 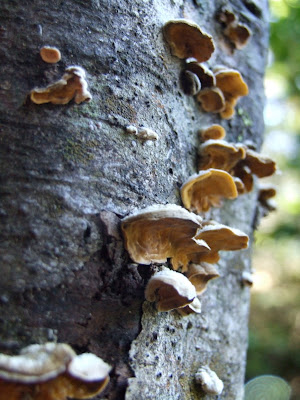 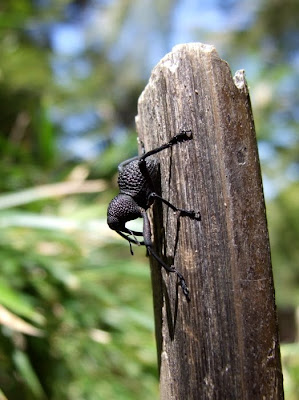 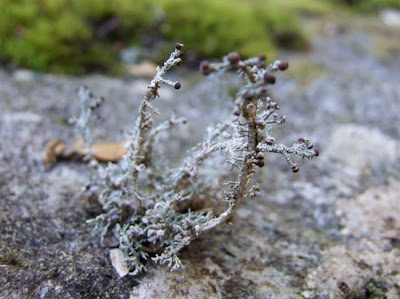 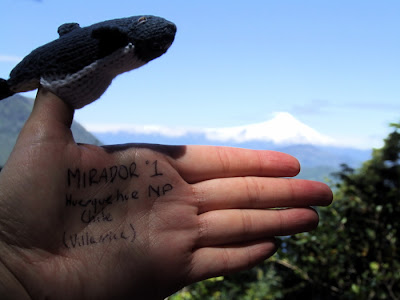 Shark Puppet neglected to point this out.

It had taken the better part of the day to get that far, and we still hadn't reached the loop. Unfortunately we were on a schedule, due to meet our transport back at the gate to take us back to town, so couldn't take our time, plus one of our number was struggling considerably with the climb.

The whole time I'd been playing leap frog with a Chilean family; husband and wife, son, grandmother and grandfather. The son disappeared quite early, which was alarming. Even more alarming was the grandmother, who was getting along with a tripod walking stick. This was not an easy hike. It was steep, muddy, slippery, uneven, and there were logs and rocks all over the path. She made excellent time though, overtaking me whenever I got caught up in taking photos, but still.

This was not the walk they or we had been offered.

Still, I pushed on up to the third mirador, and the first high altitude lake, Lagos Chico.

Which was also idyllic and lovely and serene. Total shit from a horse, all this tranquility. 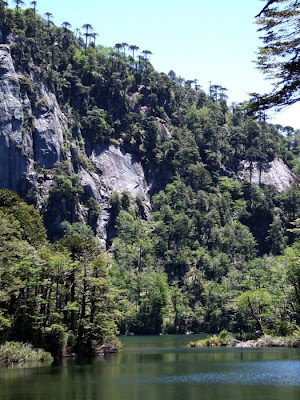 It was even lined with water plants. So, you know, if you happened to tumble in you wouldn't crack your head open. Because the world is nice like that. (Which won't stop you from being swept over the edge of the mountain by the massive waterfall plunging onto rocks and more rocks and yet more rocks for at least a kilometre into the lake below, but you can't have everything.) 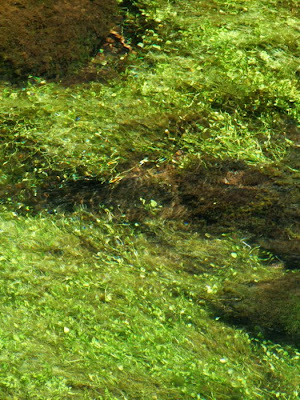 And then hightailed it back down the mountain to meet our pick up.

BUT FIRST THERE WAS A TARANTULA. 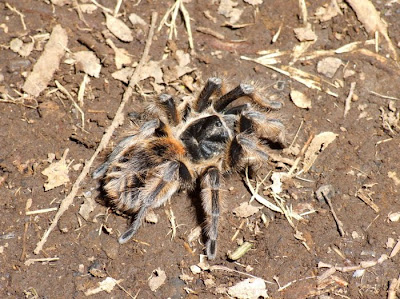 We let the tarantula have the path. And ran away.

Later, when we were back at camp with a cup of tea, we worked out we'd made the same ascent we would have made had we climbed the volcano. This discovery pissed me off to no end, because I'd made my choice assuming I would not be physically capable of conquering mountains when bloody exhausted, but clearly I was wrong.

That was Christmas Day. When everyone returned, we ate a lot, and drank a lot, my exhaustion did kick in with a total failure to cope with lots of strangers and loud noise, so I drank some more and fixed that, punch is deadly stuff kids, sang Champagne Supernova, kept the whole damn campsite awake, and eventually staggered off to bed where I froze in my sleeping bag because my tent mate found somewhere else to sleep thus failed to contribute body heat to the tent.

Labels: huerquehue, mountains, nature is WINNAR, patagonia, photography, pucón, Shark Puppet, this post is brought to you by the letters O M and G, travel