Use Once Then Destroy - Conrad Williams 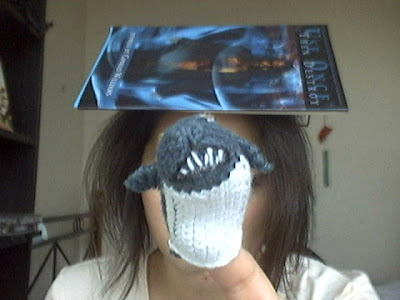 It's a totally different book with its clothes on. I take the dust jacket off when reading. Now it's all dressed up and I've lost my train of thought. Who's the mould spectre on the front? Shark Puppet approves whole-heartedly.

I was so hooked on The Unblemished that I picked this up almost right away, in direct contravention of my normal reading rules. In order to let a book stand or fall on its on merits (or lack of) I make a practice of following up with books that are entirely different, so I'm not sucked into drawing comparisons between them. Which is, inevitably, what happened in this case.

UOTD showcases a sample of Williams' short fiction over the last 15 years, ample evidence that he's been an amazing and horrible writer for a Very Long Time. There's some nasty stuff in here. I came out of "Nest of Salt" while riding the train, and had to close the book and make a conscious effort not to sit with my nose scrunched up, because...ow. It was an intriguing story, Egan's obsession being all too easy for the reader to take on, until the end, where...ow.

I'm partial to the use of streets in Williams' fiction; Egan, for example, spends too much time and money traipsing about London, looking for one elusive street, and in doing so seems to walk down every other street. I suppose it's something that resonates with me, being a foot and train person. Walking is how I learn an area. I'm there, in it, as are his characters. (His characters die horribly. I don't. I'm good like that.) It's a method of city-saturation he uses not just for London, but Venice as well, as in the highly unsettling story "City in Aspic". You've never known a single discarded glove to be so menacing.

Methinks that single author collections should not be read cover to cover, as I do. Ah, I'm just lazy. I don't like having several books on the go at any one time. I prefer to give a book my undivided attention, because I'm considerate and sensitive like that. It works against me, regarding collections. Short stories are suppose to stand alone, but reading a bunch all in one go, you can't help but draw comparisons between them, nor can you help but develop a feel for the writer's...signature? Style? Touch? I found myself coming to know the shape of these stories before they had a chance to unfold, and anticipating the rhythm and beats that the story telling unfolds to. In this case, the struggle against and final acceptance of fate (usually grisly) and an intense relief coupled with that final submission. As a result, a lot of superb and ghastly stories blended into each other, into one big block of OMG THIS IS HORRIBLE I LOVE IT. Life Lessons Extracted from UOTD: England is miserable and depressing, London is out to get you, all couples are unhappy and breaking up and only ever got together for the sake of having someone, anyone, and when they're falling apart they try to salvage their relationship by driving out to small villages on the weekend, where they die horribly and/or kill each other.

Stories that didn't follow those rhythms stood out. "The Night Before" is not horror, or unsettling, and when I finished it I had to wonder what it was doing among such company. It's a softer piece, set in Australia, an environment markedly different from any other offered in the collection, and the story smells different accordingly. It sat with me longer than any other.

Hidden up the back of the collection is a trifecta of Genius with a capital Hot Damn. "The Suicide Pit" is the train story (there's always trains, I love it), with reality gently unraveling around Fullbrook, who has the most depressing job in the world - photographing rail accidents. "Excuse The Unusual Approach" follows the fight/accept fate path, but is wearing a whole new suit, making it fresh and delicious.

The crown jewel, "Nearly People", skulks about the very back of the book. It's shoots off in a different direction from everything that precedes it, venturing more into the realm of furious and filthy post-apocalyptic fiction, taking only the nastiest and best bits of horror with it. I adored it. I dipped into it at work when the supervisors weren't looking, caught myself in that trap of wanting to know what was going on NOW but not wanting to finish too soon, and being quite bereft when the final line was read. There's a second Howling Mile novella out there, The Scalding Rooms, which I'm much a-twitch to get my paws on. Good thing PS is sold out, 'cause I shouldn't be spending that money right now. Bad thing PS is sold out, 'cause...you know. Le sigh.

Another collection, PENETRALIA, is slated for 2010 from PS. Fingers crossed.

Ultimately, this wasn't the "again! again!" I wanted after The Unblemished - there's a fine layered tension that can only be constructed in the story arc of a long work, like being slow run through with a whaling harpoon. UOTD was less like a harpoon than a gun stuck on automatic fire; just as relentless, but fucking you up in a different way.

Verdict: I suspect Mr Williams has become one of those authors about which there's no point in listening to me - you know I really, really, really dig the stories, now go decided if you do to. YOU DO. OF COURSE. DON'T EVEN QUESTION THAT.
Posted by Tessa at 8:17 pm

Labels: books, conrad williams, use once then destroy, verdict