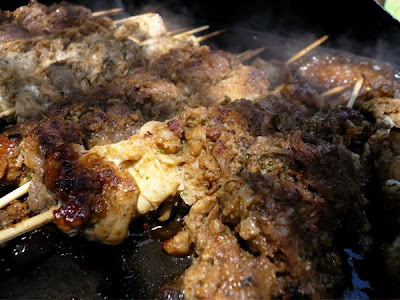 SATAY. You see? Looks like vomit. And shit. Smells like fabulous, tastes like fucking fabulous ON A STICK. Dad, who was born in Malaysia and thus has a well-trained palate in this area, made a lot of grunting noises when eating, and ended up with the largest pile of sticks on his plate at the end, ergo, recipe is now tested and certified fabulous. 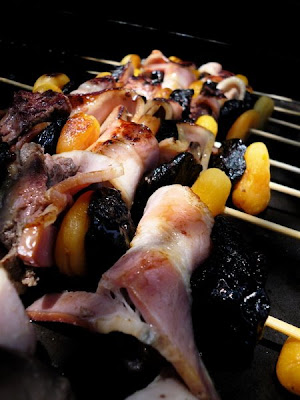 Mum made up skewers of apricots, prunes, and chicken liver wrapped in bacon, which I admit when she first mentioned, I was highly dubious of. But then we popped them on the barbie, and they smelt great, and then I ate one and it tasted even better. Seriously unexpectedly amazing, and did not look like vomit as I had nothing to do with the creation.

Dad also taught me a neat trick for reviving cucumber that's gone a little soft; soak it in a little vinegar for a while. Makes it crunchy again. 'cause you can't have satay without cucumber.

I took some pictures of the trifle, but the trifle was such a monster, such a behemoth, such a blasphemy against the order of the universe that even Lovecraft would pause and say, come on now, that's getting a bit silly, and the pictures didn't really do it justice and it's probably for the best that such an unholy creation remain unrecorded.

It looked like vomit AND snot AND blood clots. Tasted like miracle vunderbar! I won't use shop bought custard again though. It was too runny, and didn't set like a trifle is supposed to. 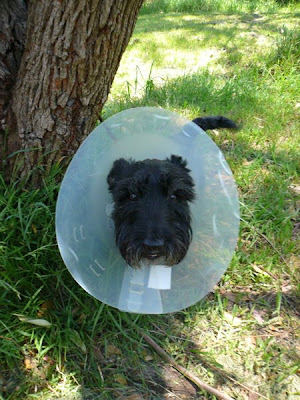 Poor Sam got a grass seed stuck in his paw a couple of days ago. Very minor, but it did require taking him to the vets and having them knock him out in order to remove it. IT IS ENORMOUS. The vet gave it to us, for some reason, it's sitting by the fruit bowl. We've taken to calling it the Demon Seed. Sam isn't allowed to lick his paw, hence the collar. We alternate between calling him Bucket, Satellite Dish and Space Dog. Well, I call him Space Dog. Mum doesn't like it, as it makes her think of Laika. He's not a victim of human science, however, he's a Space Dog like a cool frood, taking your messages from Mars, hullo, you've reached Planet Tessa, Canine Branch, How May I Help Ewe? SO CUTE.

As the subject line indicates, I have a present for you, should you wish to have one. Namely, recipe for Fabulous Satay, as given to Mum by one Audrey Wong more than twenty years ago. Thank you, Audrey, whoever and whereever you are!

Printed on type-writer, copied on thermal paper, and to continue the tradition, photographed and uploaded, for your nomming pleasure. Click for the larger picture. 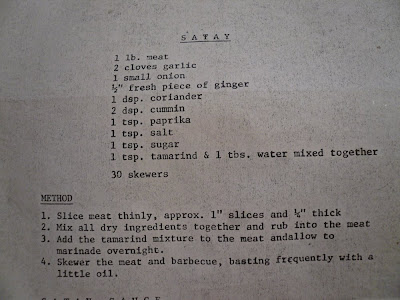 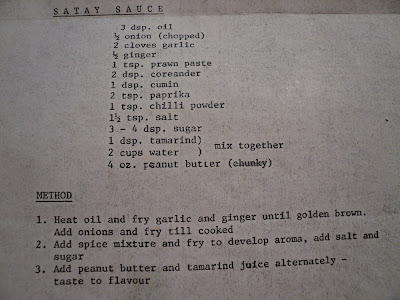