Kirsten made me giggle, comparing this place to a candy shop, because of course I immediately thought of that godawful arrogant piece of shit song by that rap guy whose name I don't know, going on about candy shops and letting you lick the lollypop, which isn't even a metaphour. He's not even trying there. And seriously, it is not a privilege to give someone a head job.

Anyway, this isn't that sort of candy shop. You don't have to lick anything you don't want to.

Especially considering today's topic is worms. A new species discovered in the Caribbean, and here I'll quote Ugly Overload as I can't say it any better;

Nemerteans are primitive even for worms. They are hunters, and kill by shooting their proboscis into their prey like a stun gun. And, AND, they produce more slime than the infamous hagfish. Morgan has witnessed firsthand a nemertean worm being placed in a petrie dish, the worm then filling the dish with slime, and thereby sealing itself in. How's that for ugly?

I mean, you can lick that if you really want to...actually I wouldn't blame you if you're mistaken at first, because these worms are so pretty! They're bright little raver worms, high on snot.

I'm pretty sure I've exclamation pointed about sun fish before, so I'll just stick to sharing this photo; 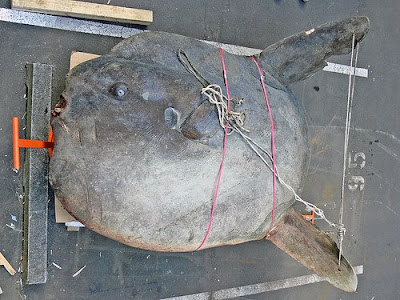 Yeah. That sun fish fills a whole freaking carpark. It was hoisted into the Australian Museum through a window. Photo found here long with general info on the sun fish, and if you like dead squid dead whales dead fishy things, the flickr stream the photo came from is worth checking out too.

You could lick that, if you like, but there've been reports that sun fish float up on the surface so that seabirds can land on them and pick parasites off them. More than 40 species of parasites. I better stop reading up on them now, or I'll be regurgitating useless information all night. I love them, they're so bizarre and dumb and adorable. They eat jelly fish, you know, by sucking them in and spitting them out so they get all ripped and easy to swallow.

Speaking of eating, I attempted to eat a piece of cheese pie for dinner. The deli advertised it as home made, and it looked good. For future reference, don't eat cheese pie. You will not win.

Argh3ammustgotobedrightnow.
Posted by Tessa at 4:14 pm