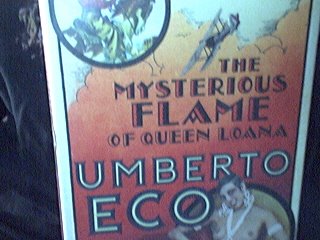 I wish I could say I liked this book, and thus have some sort of claim to literary taste. But it frustrated the bejeezes out of me, so I can't.

I started reading it at about 1am, when I was in one of my more distraught frames of mind, and it was wonderful. Yambo wakes up in hospital, and although he can remember such things as toothpaste, how to use a fork, the works of Shakespeare, he has no memory of himself. His memories of the world remain, but nothing of his life. Although it is never said, hints throughout the book lead me to assume he had a stroke. It is beautifully done, a lovely blend of familiarity, curiosity, and yet being entirely adrift in a world that knows him, but which he doesn't remember. There is no threat in this unknown world, no fear, menace or danger, and with the guiding hand of his wife, Yambo comes to one mundane little delight after another. These ordinary things that he now, as an adult, experiences for the first time. The joy he experiences from discovering how it feels to clean his tongue with a toothbrush is one of my favourite scenes in the book.

But it isn't enough for him to pick up his life, he needs to rediscover who he is, was, might be. And so his wife sends him to his childhood home in Solara, so that he might go through all the detritus of his past. And so begins the seccond section of the book.

It is this second section that had me gnashing my teeth. While the first section swept me off my feet and left me feeling calm and excited at the same time, the section left me nothing but bloody impatient. Yambo spends his time eating salads, and rummaging through the boxes in the attic of the estate. It is his 'paper memory', all the books he read as a child, his school work and badly written poems. I felt I should have enjoyed this section, as discovering what makes a person who they are is something of an obsession of mine.

There was no coherance. Yambo goes through his paper memory as we all do, picking up whatever catches our eye, again, and again without creating a structure. It was infuriating. Fog is a theme prevalent throughout the book, and this felt like reading in fog, with a whole lot of not going anywhere involved. I tried to approach it from another direction, and stead of learning about Yambo, learning about some of the recent history of Italy, but that too failed. Now I am possibly more ignorant of Italy than ever, as I have some pieces of a jigsaw, although possible not from the same puzzle. I gained no knowledge, only a deeper understanding of my ignorance.

It reminded me of year 12 specialist maths. It was like trying to understand physics all over again. I never did get the hang of physics.

Thankfully, he goes and gives himself another stroke, and so begins the third section

Here, in that fleeting second of brain spasm, Yambo remembers everything. All the questions he discovered in the first and second sections are answered, and my flagging interest picked up, but only so much. The fog finds its source. And Lila just explodes on the scene; she who was his childhood crush, one of those crushes that follows you for life, that you end up comparing every partner to, she, introduced TWO THIRDS of the way into the book just takes over. It stops being about Yambo finding himself, and is entirely about him trying to find her.

It has its moments. It is beautifully translated, so much so most of the time I forgot that it was a translation. The pictures provided add all sorts of layers and textures to the writing itself, and there are some lovely moments of revelation.

But ultimately, I felt like I was standing in fog. Frustrated and blind, and going absolutely nowhere.

Verdict: So, I think this one passed me by.
Posted by Tessa at 1:06 am