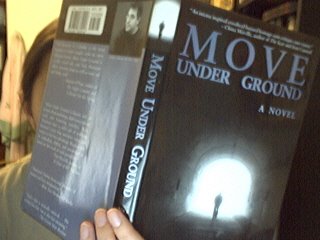 And thus I put off writing it up, for fear of making myself look foolish. Then I posted that ninja pic, and the whole foolish aspect seemed rather pointless.

R'lyeh has risen, Cthulhu is dreaming loudly, and all the world has gone to shit. Jack Kerouac, a writer with a loose grip, traipse about what is left of nonsense America looking for Neal Cassady, who may or may not have the fate of the whole world in his pocket. William S. Burroughs comes along for the ride.

That's what the book is, but I'm not sure I could tell you what it was about.

It's a little piece of brilliance, I know that much. That, is a voice. A well sculpted and consistant and unique voice that will hang around narrating your life if you let it. Without that voice, the story would just dribble away. The lines on the back say its bebop, jazz and the like. I liked it. At first, it seemed it was all telling, and then so much telling that I couldn't pause to take a breath and was drowning in this weird funky world, but by then it didn't matter. It had started, and wouldn't let me stop reading.

(I have occasionally been accused of keeping information from the reader. This book does that, and does it very well. After all, what is there that you can really be certain of when the Elder Gods come knocking?)

But I still didn't get it. I'd guess it is because I've never quite grasped what the bohemian/beatnik movement really meant. I've never quite been able define it to my satisfaction, and I probably never will, because I missed it entirely. As a result, I can see entire layers of cake that just passed me by.

Possibly I don't get America, either.

Cthulhu, however, I get. Got all that, and adored it. Throwing the map out the window was fantastic. The portray of actually walking through such an event was great, really great. Perhaps I'll be a mugwump when R'lyeh rises.

Verdict: Good book? Yes. Mildly obfusccated? Yes. Does it matter? Hell no.
Posted by Tessa at 1:38 am