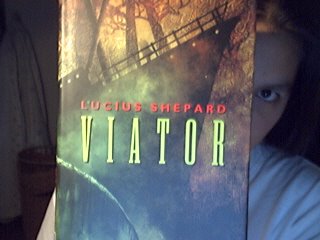 Fabulous cover, isn't it? I am quite in love with it. Nightshade do make beautiful books. The novellas especially, as this one is, are lovely to hold. It fits so nicely in my hand, with good weight, but not too much. The pages are nice to touch, and they even imprint the naked hardcover.

Originally, I'd started to read this book in the middle of a night shift. Shepard writes damn long sentences, and I mean long. They take up the whole page. He has control of them, and it isn't hard to follow them, but it was way more than I could handle at the time. So, take note: don't read on night shift.

VIATOR is the story of a ship of the same name, whose crew abandoned her, and whose captain went made and drove her into the coast of Alaska, ploughing on at such a speed that only the very stern of the ship remains on the beach, the rest of her steel carcass marooned high in the forest.

(I loved this book just from the blurb.)

Wilander is hired to join a ragtag crew of men who are assigned to the landlocked ship, to evaluate her worth in order to be stripped. They're a bit kooky when he arrives, and throughout the book descend even further into kookiness.

But Viator is not all that she seems. Something is happening with the ship, something violent and mysterious and wonderful. Not content to be cannablised, she is changing herself and those who crew her, and although trapped on land, she is still travelling, pushing her way through to somewhere else.

Wilander strays between Viator and the town of Kaliaska, between an alternate reality and one that is all too real, between his derranged crew members and the woman who could ground him in his life, in his soul.

Shepard is brilliant in shifting Wilander and the reader from what is familiar and sane, to what is unfamiliar, yet seems to make more sense. He exercises impressive control over narrative tension, and builds it up at a perfect rate of knots, exactly what is needed for the story at any given time.

I felt somewhat alien from his characters, even Wilander whom the story rides on. Perhaps, methink, this is because they're mad.

In fact, Viator herself was the character I loved most. She had grace, that banged up old ship, grace, strength, courage and cunning. And most of all, she had mystery. Not necessarily menace, but mystery.

Unfortunately, the ending sucks. After the breath-stealing build up Shepard had woven, the end was as exciting and as satisfying as scooping wet fluff bits out of the washing machine. According to a thread on the Nightshade boards, he was in dire straits himself when writing, and didn't have the capacity for anything else in him. This I can understand, but doesn't make the fact any less disappointing. Apparently, Nightshade will be releasing a paperback of the book later this year, rewritten, with an additional 10k. I am as yet undecided whether or not to acquire it, as I'm not entirely happy with the thought of buying a book twice, even if the story is changed. I've already read it once.

Verdict: A very powerful book, one whose images will stay with you for some time. Just...pity about the end. Real pity.
Posted by Tessa at 9:16 am