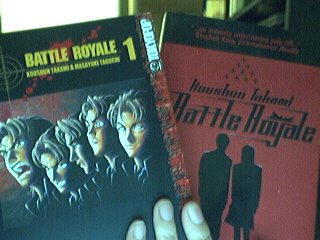 It started with the one on the left. Actually, that's a lie. It started with Peek rabbitting on and on about how awesome the book was, and the movie (which I have yet to see anywhere at all) and how I needed to go read it.

Couldn't see the novel anywhere, so I started on the manga. When I discovered that I just could not read it in public due to the sudden and frequent appearance of double page spreads of boobies and or motion capture close ups of students getting their jaw blown off, I got hooked. Anything I can't read RIGHT NOW I want to read.

I devoured it when I got home. It was awful, horrible, shocking, and the next day, I went out to get the second book.

It wasn't there, but hey presto, the novel was.

It's a big mother of a novel. There are bigger and thicker books on my shelves, but this thing has density. I think it's fitting that the book have adequet mass to be a murder weapon.

Set in an alternate universe in which Japan is one of the ruling powers of the world, it focuses on one of the products of this strict, regimented society; The Program. Random year 9 classes are selected from all the schools in the empire, and are sent to remote areas - in this case an island - with absolutely no way of escaping. There, they are fitted with explosive collars. These collars trigger if a student wanders into a forbidden zone (the island having been divided up into grids, and a good method of keeping the students from attacking their captors), if the collars are fiddled with in an attempt to remove them, and if no one has died within a 24 hour period.

The aim of the Program is survival. Of a sort. The class is set loose on the island, each student with rudimentary supplies an a random weapon. Then, they're expected to kill each other. There is only ever one winner for the Program. (There Can Be Only One.)

The reality of the situation and the total lack of say the students have in this is hammered home by a) the presentation of their teacher's corpse, he who was against the class being selected for the Program, and b) the killing of two students, in the class room, right in front of everyone else.

The story is like that. Brutal. No holding back, no kittens spared.

Initially, I had some reservations about the book. 42 students, and they all had to die. There was no way I was going to keep track of 42 charcters, but that turned out to be quite well handled. There are a handful of main characters: Shuya, Shogo, and Noriko stick together through the larger part of the book, as do Shinji and Yutaka, with Mitsuko and Kazuo being lone predators who are most definitely playing the game. The rest of the class appear, and after an introduction as to their history and character, proceed to die in all sorts of horrible ways. Morbid as it sounds, this book is one of those parge-turns because finding out who dies next, and how, is addictive.

And considering that for the first half of the book, the 3 Stooges (Shuya, Shogo, Noriko) do nothing but sit around and talk, argue, agree, until the next scene where they hash over the same conversation again, it's a good thing that there are plenty of other students running around doing things. Sad to say that in the manga, the 3 Stooges are being just as uninteresting at this point.

I wouldn't say this book is well written, and it's not something that can be palmed off on translation. Takami labourously follows the structure of; new character, state what they've been running around doing for the past few hours, go into great detail about what sports they play, or what subjects they liked, or who they had a crush on (Shuya, everyone has a crush on freakin' Shuya), then summarise the past two pages with something throwaway like "Basically, she was just your average girl," (I've never met an average anybody), and then go back to the present, where they die. As most of the characters are alone, they all spend a lot of time talking to themselves, and thinking the most unlikely things for the sake of the story. They're also the most unlikely teenagers I've ever encountered. Cliched doesn't begin to cover it.

Because Takami defied wobbly pacing, cliched characters and lacklustre writing by coming up with one hell of a good idea. This idea, setting a class of ordinary students - friends - to kill each other off on an island has more tension than anything I have ever read. Lots more. If I put all my high paced scary books on a shelf together, Battle Royale would just laugh at them. There is a lot to be learned about ideas in this, with time limits within time limits, and characters that you'll like despite it all.

Because I think, no matter what age we are, we can all relate to high school students. We've all been there. And reading this, there's a part of me thinking "That could be me."

(I don't think I would have lasted very long.)

If you don't have a problem with any of the above, if you have even the slightest interest in this book, my dogs above, hie thee hence to a book store and get this book now. It isn't a story. It's an experience.

Verdict: You know how half way across the road you look up to see oncoming traffic oncoming very fast, and you make it to the other side with time to spare, but your heart is hammering anyway, because you didn't see that when you first stepped out, and you nearly died, and it wasn't good, but damn what a rush.....
People chop up Battle Royale and snort it. It's that good.
Posted by Tessa at 9:01 am