(Originally, I tried to get my hair in a topnot, as pictured on the cover. You'll just have to do without, as I have too much hair, and not enough hands.) 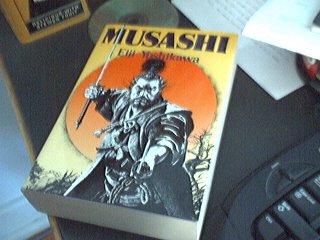 This is the second time I've tried to write up this book, and I'm not sure I'll succeed. There's too much contained between the two covers for me to handle, because I'm not a reviewer, just someone who gets excited about books and feels the need to share/inflict this excitement.

This isn't a story, it's great handfuls of stories that end, start, twist, change, mature, overlap, entwine, split, and makes it just about impossible for me to provide any sort of overview. But, I shall try.

It begins in the aftermath of the battlefield of Sekigahara, with Takezo and his friend Matahachi lying among the corpses. They were not on the winning side, and there are limited options for the losers of great battles, being branded as traitor to be killed on sight, and having not a scrap of honour with which to return home.

Their paths diverge; Matahachi runs off with a praying mantis like widow and her daughter, despite being betrothed to the beautiful Otsu back in his village. But the widow Oko doesn't care for him, merely understands the need to have a man about the house in these times, and after breaking his engagement with Otsu and thus disappointing his mother, he cannot return home. He sits in the back room, and drinks sake. At some point, he finally plucks up the courage to leave, but instead of making steps to amend his wrongs, he goes on to pursue some imaginary easy life of money, sake, women, and respect. He makes no effort to work for this life, but instead waits, and waits, and waits for it to drop in his lap. From stealing from dead men, impersonating heros, kidnapping women, and estranging his mother, he drops from on depth to the next, until, at last, he learns. In taking responsibility for his actions, he finds strength, and more importantly, peace.

Otsu at times I wished to dismiss as nothing other than a silly girl, but she of all characters proves the strongest. An orphan consumed by the loneliness of having no family, abandoned by her betrothed, and then after saving Musashi, further abandoned by him, she spends the book travelling across the country, largely alone. She doesn't have the physical dominance that rules so many people, nor does she have the safety of a powerful clan to shelter in. What she does have, is a willpower that is unmatched by any of the enormous cast of this book. It carries her through all sorts of horrors, and in the end, she triumphs.

Osugi, Matahachi's demonic mother, also possesses an incredible force of will, but it is that blind, raging, destructive willpower, that hinders her more than anything else. She won't consider that her son is less than perfect, refuses to acknowledge the dissolusion of the betrothal and as such, considers Otsu her propert as daughter in law and slave, and blames everything, possibly even the weather, on Musashi. The years she spends chasing around the countryside after him, determined to have revenge for something that she can barel remember, see her lose her family, her meagre friends, until she is nearly beyond redemption. For her cause is perhaps the worst, in that she fully believes in her righeousness in all things.

Takezo, who becomes Musashi, goes through the greatest transformation of them all. As a selfish and angry young man, he decides to find the Way of the Sword, and over the ten years covered in this book, learns that the Way does not merely mean becoming an expert swordsman, but an entire way of living, inside and out. In his travels he makes many mistakes, but he learns from them, and in doing so becomes a mature and wise man worthy of the respect he commands, and humble enough not to accept it.

As I said in a previous posts, through his insights I learned a little about myself, and how much further I have to go.

Those are but a few of the immense cast in the book. There really are too many key characters to count, and their tales are so complex and so tangled with each other, than I won't try to unpick it.

The translation is the best translation of japanese I've come across yet, but given how highly regarded the book is, I'm not surprised. It still suffers here and there, as I cringed at 'okay', and an awful lot of samurai have fire shooting from their eyes, but they are very minor things. Interestingly, I think this is one case where a shifting POV works. Currently butting heads with omni POV as I am, it was interesting to note Yoshikawa's use of head jumping, which is seemless and well used.

Finally, this is a japanese samurai story written by japanese, for japanese. I learned a lot, both in terms of a history and culture I know very little about. I can't help wondering how things would be if Australia had a folk hero like Musashi to idiolise. Instead of the honour, respect, wisdom and kindness that comes from trying to emulate Musashi, we have...well, Ned Kelly I suppose. Who was not about honour, respect, wisdom, and kindness, but fighting for the underdog.

I'm all for underdogs, but there's an inherent conflict involved in standing up for one.

Verdict: An astonishingly complex and wonderful story that is less about grand bloody battles (although they happen) and more about people, the way they are, and the way they learn. It is one of those books that will make you stop and think hard about yourself, and perhaps grateful to be given the chance to change for the better.

I'm looking for my Way. May I never achieve perfection.
Posted by Tessa at 5:31 am