I realise that in order for speculative fiction books to do well within your marketing environment, there is a need to get books off the genre shelves and onto the mainstream shelves. I don't have a problem with that.

I do have a problem with the fact that, apparently, in the UK publishing world, 'mainstream' is another word for 'shit boring cover'. 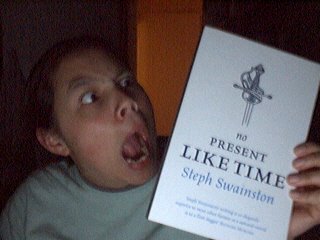 While I am a fanatic book preservation cultist, I am well aware that by eating this copy, I could go out and buy a prettier one, with a cover that had something resembling personality.

I even find that the original Wheel of Time covers, with all their whacky proportions, are preferable to the new super bland masks they wear now.

I had an odd relationship with The Year of Our War. Aside from dealing with the mild fork in the eye that is discovering one of your favourite story ideas is already in someone else's book, it just didn't....there wasn't...the chemistry-

-I felt that I really should like it, yet I didn't.

That initial feeling didn't dispel in the first few pages, chapters. The new pieces of world introduced, Jant's relationship problems, politics; it all felt like a set up for a sequal, not a story that appeared on its own. The Insects were pushed back, so Swain needed to devise a new enemy. There's nothing wrong with the story as it is, it just didn't sit right with me.

And while I love stories of long sea voyages, and discovering new lands, and giant sharks and serpents, I found that this time around the wonders of the world did even less to woo me, something that I feel is partially due to the characters.

Characterisation is Swain's trump card. Jant, an immortal junkie academic, is a hard character to nail down, but she staked him out well and good. As protagonists and narrators go, she brings out his unreliability, selfishness, obsessiveness, neediness, etc, and instead of making him an utterly dispicable character, she made him fascinating. That is skill, right there. I fell a little bit in love with Jant, in an I-want-to-throttle-some-sense-into-you way.

Which is pretty much all the book had going for me, because nothing else has stuck. Not the giant monsters, not the sieges or the flying or the fighting or the sneaking. Just one brilliant character.

Taking half a minute to dredge up what else I thought while reading; the title irked me. A third of the way in, a new country is introduced, and this country's currency is time. This coin here, is worth half an hour. This note, is a day of labour. You work, you get paid. It's a lovely idea, and given all the stalling and shirking and waiting for everything to sort itself out Jant was doing, I expected time to play a larger role, but instead it got lost in the smoke and the blood and the drugs.

Guess I like my themes to stick around, instead of wandering off.

Verdict: Yeah, it's an okay read. It didn't displease me at all, but neither was I burning through the pages. I do believe there is a lot to be learned from Swain's use of voice and character, which is of value to any writer.
Posted by Tessa at 8:48 am