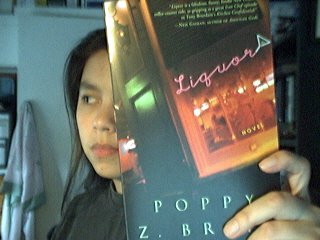 Signed. Normally, I go giddy over having a book signed. It feels like acknowledgement, putting the author's book in the author's hands, that I loved the book that much to go giddy fan girl on them. Well, this time it felt like cheating, because at the time I hadn't yet read Liquor.

Now I have, and I'm glad I took the opportunity to have it stamped.

Prior to this, the only Brite I'd read was her collection of short stories, The Self-Made Man. This book and I, we didn't get along that well. I haven't had a problem with horror in the past, but Brite does her sex, violence, and gore that well, that it got under my skin and left me feeling decidedly unsettled. Her writing was excellent, I just didn't enjoy the content.

Possibly a much crueler environment.

Set in New Orleans, it follows the lives of Rickey and G-man, two kitchen workers who are taking that mad leap into opening a restaurant of their own. In fact, that's the entire story. There is an evil nasty antagonist of sorts, but he's almost incidental, and given how much appears to be involved in opening a restaurant, there's material for many more novels in there.

Brite's biggest strength is her characterisation, no, not just her characterisation, but the dynamic between characters. She is a master at that which I take too much pleasure in messing around with: chit chat. The seemingly idle banter of her characters disguises itself as random shit talking while moving the plot steadily along. (My random shit talking, while amusing, tends to actually be random shit talking.) Rickey and G-man are fascinating guys, their relationship especially. That of two people who have known each other so long that it doesn't really matter (but it does), and that the act of not being overly intimate in public occasionally intrudes on their private life, these things have truth to them.

I can't comment on whether or not she captured the restaurant scene, or New Orleans, knowing very little about either, but I do know that I learned a lot about kitchens and cooking from this slim little book. And every second page made me hungry.

As an aside; this book has fantastic flop. The pages aren't stiff, and the cover is lovely.

No, I don't have a lot to say about this book. Partly because I read it a while ago, and most of it has slipped from my mind, but mostly because it was a straight forward story that was very well told. Given my normal reading habits, it was a wonderfully refreshing romp in a world I know nothing about, and a fantastic example of characters driving a story, something I'm becoming more obsessed about.

I'm saving the second book for the next time I need something different, with boys boys boys who swear swear swear and a good story.

Verdict: I don't think this will change your life, but it is very well written, and the characters will stay with you. So will risotto. Mmmm.
Posted by Tessa at 6:27 am