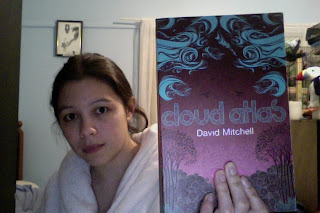 This book has been sitting on my shelves for 8 years. The receipt is tucked in the back cover. August 2005, which was when I'd just started my first job with my current organisation. It must have been a celebratory purchase.

(I don't  purchase books to be read instantly. My shelves host a library of books I have and haven't read, so that when it comes time to choose my next meal, I have a wide selection covering all moods and tastes from which I can choose. Having a To Be Read pile that spans shelves is not ideal, perhaps, but it does mean I am always reading a book that I feel like reading right at that moment.)

It was a quiet, subtle reunion. Stepping into this cramped and cluttered room after a year and a half of living out of a bag. All this stuff. All these material objects. And yet, no. There is not so much here that is not a book. I have so missed the presence of books. They are a form of companionship, much similar to the way in which our smart phones mean we are never truly far from contact, although perhaps inverted. A wall of books will hide and protect you from other people. A wall of books is a wall of doors, over which you have absolute control which and when you choose to open and close.

(And they remind me of the direction I hope to take my life in, the purpose to which I have given myself. That anchor, too, is comfort.)

What with the film out Cloud Atlas seemed a natural choice. Despite it having circulated around for more than a decade, when I started in on the first few pages I discovered I actually had no idea what this book was about, other than it was supposed to be extremely good. This was probably the best way to step in, as there is no way to truly describe the accordion of civilisation and souls. It is easy to say what happens, but not what it is about.

What it is, is extraordinarily well written. Wonderfully. I fell in love with the somewhat archaic voice that narrated the journal in the first section, and delight in how thorough that tone and flavour changed in the second. Voice, this book is so much about voice. That middle, pinnacle of reach, in which voice plays a part as strong as the events being narrated. When a voice that is so varied from what we expect of written English and yet the reading of is near invisible, then some truly incredible textures are formed.

(I did have issue with gender roles, especially in the second last histories. Surely, surely, surely by the future such gender typing will have long broken down. Surely. It wasn't something that struck me as a statement the author was making, but simply decisions about characters made according to an unacknowledged bias.)

(Also with the idea of white-skinned people being some sort of apex from which mankind shall fall, and I do say 'mankind' deliberately in this instance. The inversion of race is noted, but whether it was successful in what it attempted to do I withhold judgement.)

It is an incredibly complex, subtle and beautiful piece of work. As far as storytelling goes it is sublime, with an incredibly nuanced cast and intricate thematic weaving. I adored the shit out of it, and as a result I will not be seeing the movie for at least a few years. I don't quite remember if I have anything more of David Mitchell's work in my library here. It is something I will have to amend.