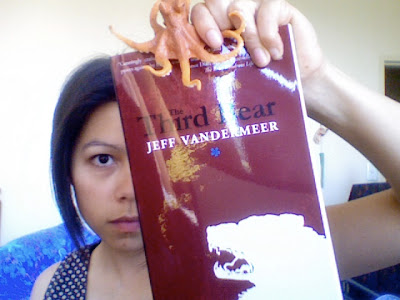 I do not have a bear. Well, I do, but I don't know where he is. I do have an Octopus God, however. He is not protecting an island. He is just hanging out on my desk.

The other good thing about my diagnosis is that my Reader's Block has been removed. And when I say 'removed' I mean 'asploded with fifty-million tons of shark dynamite'.

First book of the year!

This book is a soft re-entry into the world of reading, being as it is in essence a reread. I was sent the initial MS to poke at with a stick, and even on that reading many of the stories contained I had already read.

It is well established that I am a touch sycophantic about VanderMeer's writing, and this is why: it's really fucking good.

(It's obvious I haven't done a book write up in a while. I have no idea what I'm doing. Faff, faff, faff.)

(Structure? What structure? Articulate the awesome?)

It opens with the title story, The Third Bear, which is a bit like opening with the experience of being buried alive. It is claw-swipe to the guts, leaving you wretched, hopeless, horrified and inexplicably mournful. The Third Bear is, undoubtedly, a showstopper.

After which the show begins.

Story after story. Should I attempt to single out only the best, I would end up listing and babbling enthusiastic about them all. There is not a weak link in this chain. Each story rises up to completely obliterate the taste of the story that came before, and then be obliterated by that which follows. There is among them an echo, a resonance, of what is noted in the Afterword as "...the search for, or encounter with, the inexplicable." These stories that seek to contain such vast mysteries they are dense with all the unknown unknowns and gently and sadly weigh the reader down with the loneliness that comes with acknowledging all you will never understand, until you, I, the reader, stumble out the end of Appoggiatura and blink, bewildered to find ourselves in such mundane surroundings - these beige walls and beige carpet and beige blinds - and some threshold has been passed through. The grief of knowing that the accumulated learnings of your life will amount to exactly nothing becomes the joy of knowing that there are such inexplicables in the world, and that, in itself, is enough.

These stories speak to each other. Between the covers they have conspired and so the Third Bear can be found later in the stairwells of a story of a different kind, a dead woman's arm goes on beyond its genesis, the colour green, scent of lime, and a name; the stories more than nod at each other, they wink, whisper and play tricks on the reader. It is not merely a collection of short stories, but an obscure and subtle mosaic that upon rereading will give up more of itself to the reader, as teasingly as any reachable mystery.

Errata and Appoggiatura have been staked out as special territory for years. The Tor podcast and podcast by Jason Erik Lundberg having kept me company while I kept insomnia company. I know them word for word, and small edits made me sit up, nodding as a line was joined between a dot here, or some balancing applied there. They are both astonishing feats of art and heart. It is hard to imagine any of the other stories could survive between three such immense, all-consuming, unremittingly powerful pieces, and yet, each story is so sure of itself, so comfortable in its individuality that survive they do.

I don't generally plan on rereading, but that this is already read, reread, and now reread again, and still the stories affect me profoundly, and still I find myself grieving to have reached the end, and sit here wondering if perhaps maybe I could start another reread here and now...that is a mark of the quality of this book. The reflection on the cover is a gorgeous summer day I only just noticed and have not been out in.

Verdict: One of the best, most challenging and ambitious and powerful collections ever. Of all time.
Posted by Tessa at 7:25 am